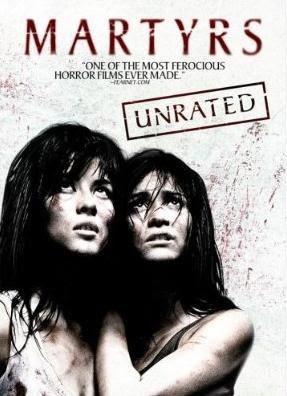 French filmmakers, man. What the fuck. According to the director, Pascal Laugier, Martyrs is an experimental film. I can instantly understand what he’s talking about. It’s like there are two separate films – one for the first half, and one for the second. At this point in my thinking, I’m not even sure if that’s a bad thing. I’m going to go into plot specific points after this paragraph, so be warned. Normally I don’t go into spoilers, but the things I really want to talk about require a tad bit of spoilage. I won’t give a blow-for-blow account of things, but just be forewarned that I’ll be mentioning details that you won’t want to know without seeing the film in its entirety. Anyways, I’ll say this about Martyrs: it’s not afraid to express an opinion, and that same brazenness might actually do the film harm. As of yet, I’m undecided as to what side of the camp I fall in. Maybe by the time I’m done writing, I’ll have a better understanding of what my full opinion is. We shall see. 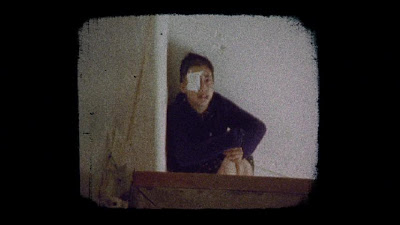 The story centers around two women – one has been horribly abused as a child, and the other befriended her during their stay in some sort of orphanage. The ordeal was obviously traumatic, as the abused girl has near-debilitating hallucinations that manifest itself in reality in the form of self-mutilation. The set-up briefly shows the two growing to know and trust each other. And by briefly, I mean about fifteen minutes. The length of character set-up isn’t a problem; it felt like just enough explanation for what was to come for me to be satisfied. But the story quickly ramps up, when, about fifteen years later, the abused girl somehow tracks down the people who hurt her so long ago. And by hurt, I mean locked her in chains in a dank, dark basement in order to physically beat her with no mercy while feeding her just enough to keep her alive. By some freak chance of momentary mental lapse on the part of her captor, she escapes and lives to tell the tale. Naturally, the girl has severe mental problems, and the single thing on her mind is to track down the people responsible and dole out a good bit of fuck you justice. Aided by her childhood friend, her punishment is exacted in a way that only a psychotic could envision. 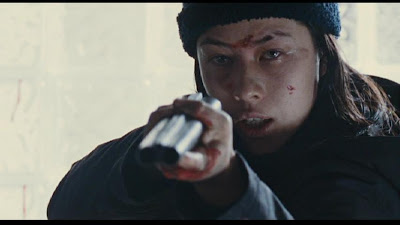 An important part of the film is what happens after the deed is done. The girl still can’t get rid of her imagined demons; in fact, they seemingly grow in intensity. Despite that, her loyal friend is there to help her though her trying times. Trying times that include murdering four people in cold-blood, but trying times nonetheless. I don’t necessarily advocate the killing of anyone, but I can put myself in her shoes in order to see why she did what she did. For one, she’s so mentally fucked up that a shotgun is just as good a tool for justice as an arrest warrant. In her case, rationality is about as far down the list as what brand of toilet paper to purchase during her next grocery store run (I always buy Angel Soft). At this point in the film there seems to be two themes running through it: being so deluded as to warrant rampant murder, and the thickness of a friendship bond almost overriding personal morality. I say almost because the deluded girl’s trusted friend second guesses her during a crucial part in the story. In fact, her second guessing will have an impact on her immediate future. What future is that? The impact is for you to watch, my friend. 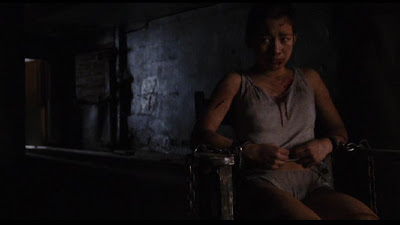 Regardless, the story moves on from there. And here is where the schism presents itself. Up until now, the film was about one person’s mental delusions and what they lead to. The root cause was external, but her mind is so weighted down that it can’t function properly anymore. A mental delusion is not the same as an actual outside force surgically guiding the outcome of a given situation. If you don’t know what the fuck I’m talking about at this point, that’s ok. But like I said, there are two different films vying for supremacy. In the end, I think neither one reigned supreme.

Once the deluded girl’s story is completed, her loyal friend’s saga is just starting. She is basically subjected to the same torture her friend endured, only now we as viewers have a better understanding as to the reasoning behind the fucked up human experiments. The long and short of it involves some kind of crazy fucking cult that is obsessed with finding meaning after death. Apparently, according to this cult, the meaning of death (and life after death) can be found through extreme suffering. They think that extreme suffering to the brink of death will result in some sort of insight into the afterlife. My first thought about this is that someone’s personal experience, regardless of the amount of suffering, will always be subjective. Truth has no bearing on these proceedings. Rather, each person’s individual suffering and revelation is unique to that person. To attempt to extrapolate an objective truth is patently absurd. 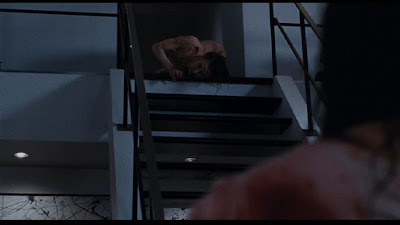 From that standpoint, the title Martyrs doesn’t sit right with me. In order to be a martyr, one would have to die for their own personal beliefs. The characters (or at least one character) in this film don’t live or die for any specific beliefs. Their situations are dictated by an outside force that doesn’t take into account their wants or needs. The whole point of being a martyr is that you die for your own beliefs in the face of contrary beliefs. The film offers up a definition of martyr meaning “witness”. If being a witness was the only attribute of a martyr, then the whole concept would be a lot less serious. However, another interpretation of the movie’s title could be that it comes from the point of view of the crazy cultists. They view their victims as martyrs dying for a cause, so in that sense I can agree with Laugier’s decision to name is his film after that. 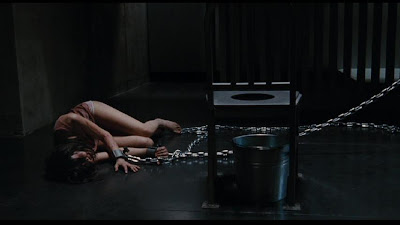 I’ll quickly mention the gore and blood and all that, since, durh, it’s a French horror film, after all. It’s by far not the most graphic film I’ve ever seen. Inside, another French piece, is way worse on that front. Still, there are some truly shocking moments, and it’s definitely not light on blood. It’s a sick, twisted film, for sure, but it also doesn’t linger on about it as long as some other films. All in all, I think it has enough to satisfy the light to mid gorehounds among you. Oh yea, there is one holy shit moment towards the end, though. I’m not sure that anyone could actually survive it, but oh well.

[edit...] Maybe I'm full of shit about that, because the whole fucking thing is about getting tortured and beaten. Am I that desensitized? I do find this kind of shit gross and everything, but wow. I just said this film doesn't linger on about being sick and twisted, when that's exactly what it's about. Weird.


Anyways, life after death is something this film certainly concerns itself with. The only thing I come away with after the ending is that there is nothing after death. I happen to agree with that assessment, but being as objective as possible, that conclusion was artificially reached. The cult that tortures people only wants to find out what is out there once you die. When confronted with some kind of subjective perspective of what happens when the human brain suffers severe trauma, the leadership of the cult falls apart. Big fucking surprise. There were no scientific experiments that I saw, or anything that would constitute the scientific method. Just a bunch of crazies that had access to poor schmucks for their sick fucking fantastical experiments. Like I said, I’m not sure how I ultimately feel about Martyrs. But I would surmise that the simple fact I’m willing to entertain the ideas put forth in the film says something about its quality. In any case, I recommend you check it out and consequently contribute to the conversation. And hey, guess what? It’s light years better than fucking High Tension. Good lord, that ending blew ass.

[adding…] After having a day to think about it, I really do like every aspect of the film. I mentioned earlier that having two separate stories threw me for a loop, but I think the transition makes a lot of sense the way it was done, and it lets you see both main characters struggle through some horrendous shit. And when I was criticizing the cultists, I was doing so strictly in terms of how stupid and crazy cultists are, not because of bad writing or anything like that. So, basically, thumbs up all around for Martyrs. Woot!