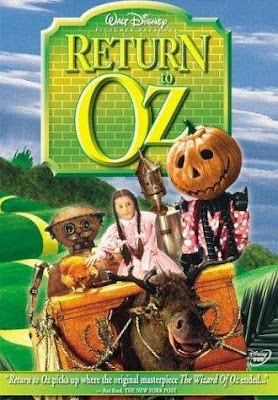 That's not a creepy, photoshopped version of Fairuza Balk. Also, that's bullshit throwing the Tin Man in there.
Oh, hey, I forgot about this place. So, yea, I just finished watching Return to Oz. It's one I saw years ago, and I've owned the DVD for some time now, but tonight was the first time I'd seen it in at least 15 years. It's interesting what a child's brain remembers, especially when that brain, aged a bit more, gets to see the same images through an adult filter. Guess what, though? Return to Oz is still pretty fucked up, so the cheering can commence.

First things first; I remember the movie covering a hell of a lot more ground than it actually does. I mean, there's really not much going on at all during the 110 minute run time. The movie didn't feel short, but I'm having trouble coming up with an answer as to where the last 2 hours went. Here's a pretty faithful plot synopsis: Dorothy is having mental issues stemming from the whole tornado episode that happened 6 months ago, so good ol' Aunt Em decides to take her to a doctor with one of those new-fangled electric machines. All doesn't go well, and Dorothy ends up back in Oz, only this time Oz sucks. Picture the Emerald City, but if it was run by the Warriors or the Baseball Furies (whichever is more your scene). In either case, Dorothy finds another group of rag-tag unintentional ass-kickers, and they head off to the Nome King's mountain, where they play a short guessing game. Dorothy wins, and everybody is happy. She goes back to Kansas, where everyone is looking for her, and she lives happily ever after. Except...

...oh, yea. See, it's almost easy to forget the whole reason for Dorothy's second visit to Oz. Oh, it's just her imagination. Oh, the weather was horrible and she had a nightmare. Oh, a scary man administered electric shock therapy to her. Wait, what? Yes, that's the impetus for her return journey: electric shock therapy. I guess the turn of the century brought with it some magical new scientific devices (get it?) that were able to explore the depths of the human mind. By "explore," I mean shocking the shit out of her until her mind drifted away and she ruptured a lobe or something. She got tazed, bro. 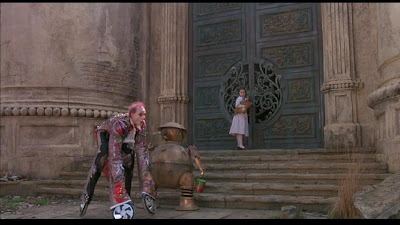 Check it out, it's like I said: The Warriors with children and mechanical wonders.
In fact, she got tazed so hard that instead of curing her "waking dreams," as the magical looney bin doctor put it, the experience immediately sent her into a fucking frenzy. She somehow managed not to drown long enough to wash up on an embankment, where she probably just lied there unconscious for a while. How do I know this? Well, the film uses a couple of tricks that the original had in its bag way back in 1939. The biggest and most telling technique is the transposing of certain images and sounds from Kansas into Oz. When Dorothy first arrives at the looney bin, she's escorted to her room. While walking down the hallway, a probably retarded man is seen pushing a gurney on loud, rusted wheels. A few minutes later, as she sits in her room, she can hear the horrible sound of the wheels slowly moving towards her from behind the door. That would be a pretty disturbing experience for a 10-year-old, and, what's this? Oh, the Wheelers in Oz get around with wheels on four appendages, and they make a loud squeaking noise as if they were rusted. Yea, that's called psychological trauma. Also, the head nurse in Kansas was pretty straight-laced and creepy, so it's fitting she was turned into a witch. Fuck her and her black outfit and way too tight corset. The looney bin doctor also had a fitting alter-ego in the Nome King. Props to that dude (sorry, too lazy to grab his name) for really selling the Nome King to me. I think that role could have easily faded into the background as the stop-motion effects took over, but the facial expressions exhibited by the King were spot-on. I don't know if the voice-over was done by the same actor, but whoever did that deserves equal amount of props.

After watching this film again for the first time in a long while, it really did feel more like a children's movie this time around. But a lot of the creepy stuff I remembered was still there, such as Princess Mombi's hall of heads that she would switch out with her body whenever she felt like it, I guess. In a rare scene with details, Jack (the pumpkin-headed dude played by Brian Henson) lets us in on the little secret that Mombi can only remember shit when she's wearing the same head she was when the thing she's trying to remember occurred. In other words, if I was wearing head number 2 when someone punched me in the face, then decided to put on head number 1, only head number 2 would know about the face-punching. Anyways, it's fucking disturbing when you have a long hallway full of heads screaming "Dorothyyyyy!!!!" as a headless body fumbles around with both arms out trying to strangle the life out of a child. 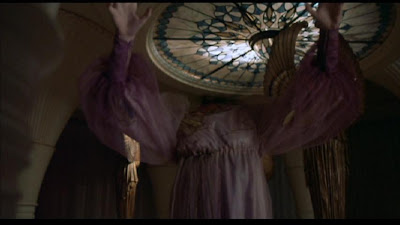 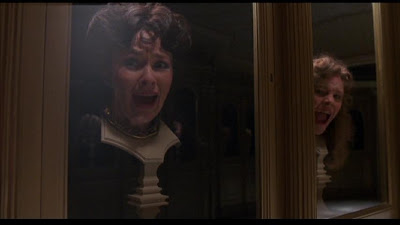 Not pictured: something not disturbing.
I'm not sure what other stuff makes an almost one-to-one translation from Kansas to Oz, but I'm sure there's some more fucked up shit in there for more astute (read: unlazy) viewers to pick apart. I think I got all the metaphors I needed from my viewing. Oh, sorry, there's one more. Right before Dorothy is given electric shock, the doctor shows her the machine he uses. He clearly points out a "face" on the panel, and it has a little wind-up part to it - just like Tik-tok. So, is Dorothy in Kansas anymore? Um, no, but she's not in Oz, either. She's in fucking La-La-Land along with everyone in Gitmo. What doesn't kill her only makes her more susceptible to further harm, right? Right. 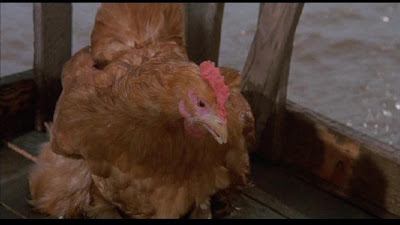 You know what? Who cares. Greatest animatronic chicken. Evar.
I'm gearing up for a run at reading the first 14 books in the Oz series, so I figured I'd throw this on as an appetizer. It certainly did what I wanted it to, and I'm ready to delve into the source material and see how many times the Tin Man hacked off his own limbs. Maybe I'll make a drinking game out of it.