Han Solo vs. Greedo. Yea, Some of You Are Retarded.

...George Lucas is a fat douche who doesn't know his own films' lore. Why, you ask? Ah, let me tell you. You know that whole "Han shot first" bullshit? Yea, well, as it turns out, there's no other explanation. Observe the original theatrical release of Star Wars:


This is called murder.

Oh, what's this? Lucas decided to care about "the children" and re-edit the film? Hey, guess what? FUCK YOU George Lucas. Your bullshit will not go un-called:


This is the Lucas version of photoshopping.

That's just about the worst shit I've ever seen in my life. Not only are the lazer shots horribly, horribly forced, but we all have to endure the ugliest digital manipulation known to man. Lucas just moved Harrison Ford's head like 6 inches to the left, regardless of what he was dodging. Even if his head never moved, Greedo's AWFUL FUCKING AIM would have never got anywhere close to his head. Either Greedo is the worst bounty hunter with a rubber face mask to ever hit the galaxy, or George Lucas sucks at rewriting history. Hmmm, which one is more plausible? Fuck you, George Lucas.

If Lucas was really concerned with the children, he might have considered taking out the part where Luke's aunt/uncle was burned to a crisp and lying face-first in the dirt. Dental records might help identify the body, but the 8-year-old watching the film might still have a problem. FUCK YOU, GEORGE LUCAS.

Like, decapitated ones. Or, at least that's what Luke Skywalker thinks. What better scene to show the kiddies than Luke cutting off the head of Darth Vader, only to then reveal his own face under the helmet that inexplicably explodes? Fun for the whole family.

Why, this being a family film and all, it should have all kinds of wondrous sights, right? Ah, yes, here's one: the frozen body of Han Solo; stuck in place for all eternity so that Jabba the Hut can have a living room decoration. It's laugh-out-loud hilarious.

I also failed to show the whole rancor bit, plus the part where Luke, Han, Lando and Chewy throw a whole bunch of people to their disgusting and detestable deaths, being slowly digested alive by a giant worm. AWESOME. 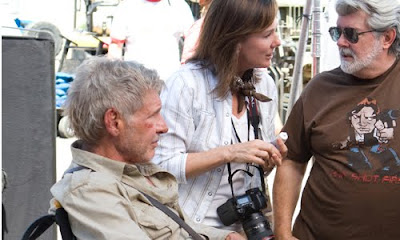 Pictured: Lucas being a contrarian tool. Harrison is not digging the man-titties.

Posted by Sir Phobos at 3:56 AM No comments: