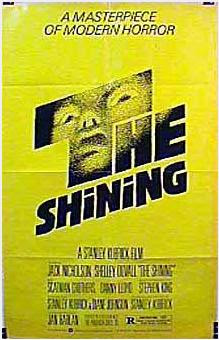 I'm not going to be so bold as to "review" The Shining. That would be stupid and a waste of time. Instead, I just want to briefly explain why I think it's the greatest horror movie ever filmed. OK, that's obviously not just as bold as reviewing it. Whatever, it's my blog.

For one, The Shining succeeds doing so many things that most horror movies absolutely fail at. It puts believable characters in extraordinary circumstances and gives them room to breathe. It's also not afraid to set the mood by ratcheting up the tension only to have no short-term payoff. There's no exposition of any real meaning, and the story is told from a sort of detached perspective. By that, I mean the film isn't told through any one person's eyes; it's like the camera is simply in the right place at the right time. Pretty much everyone in the film is flawed in some way, but those flaws aren't ever used as a contrivance to advance the plot, or as a bullshit convenience to make some ridiculous event more plausible.

To put it the most succinct as possible, I'm saying The Shining is perfect. You don't think so? It must suck to be wrong all the time. There's nothing that can be improved upon in any meaningful fashion; no director's cut, no deleted scenes, and no commentary could elaborate on events in the film without taking away something integral to the experience. It's as good as any fictional piece of entertainment is going to get. I titled this entry An Exercise in Layers for good reason, and, as an obvious fan of hyperbole, I'll add that no horror film will ever surpass what The Shining has accomplished.

The obvious first layer is the film's visual style. In typical Kubrick fashion, a lot of scenes are very tight and angular, giving off a claustrophobic sense of dread and foreboding. Even before the shit hits the fan, Jack's interview is uncomfortable and slightly off-putting. Basically, the film establishes strictly by visual means that nothing good is going to come of the situation these people are in. This same style permeates every shot, and the tension that slowly builds throughout is due to the mostly odd framing and striking visual cues. Nothing has done it better since, and I highly doubt anything ever will.

The second layer has to do with the characters themselves. Right from the get-go, Jack Torrance is pretty obviously a scumbag. He never quite seems genuine in his interactions with other people, and he's outed as an alcoholic, abusive prick before the story even gets going. Wendy, on the other hand, is the sweetest person alive, but why does she stay with someone like that? She could be a saint, but her decision to continue to allow herself and her son to be around someone like Jack doesn't make me very sympathetic to her cause. She may be a victim, but at least in the film, she's never made out to be the kind of person that would defend herself. Her rationalization of Jack dislocating their son's arm is, "it's the kind of thing that a parent does a thousand times to their child...". That's the most bullshit excuse I've ever heard. The only person that deserves sympathy in that family is Danny, simply because he has no say over his situation. So, it's in these character flaws, which are never sugar-coated or dismissed as a small part of the whole, that The Shining is able to deliver genuine horror over a scary good time.

The third, and arguably the most important layer, is the fact that the unexplained stays relatively unexplained. In a lot of horror films, there's inevitably a scene where an all-knowing or extremely wise and experienced character gets to sit down and lay out the who, what, where, when and why of literally everything that's been going on. And while there are plenty of guilty films that I still love, I can't help but call bullshit on that narrative choice. It's a cheap cop-out that gives the writer/s and director a way to make sense of things that shouldn't necessarily be explainable. In most cases, once every facet of a horrific story is laid out on the table, plain as day, its impact is dramatically lessened. Oh, the murders were all done by the guy who got killed in that building fire 20 years ago. Ah, yes, it was the Devil himself who was possessing that serial killer all along, and he was recruiting a shit-load of minions to do his dirty work. And he would have gotten away with it, too, if it wasn't for those pesky kids and a dog named Scooby Doo. I think you get my drift, anyways.

The Shining, on the other hand, allows the dread to slowly ratchet up by giving clues as to the nature of what's happening, but never fully explaining it. There's a choice bit of dialogue by Jack before he goes completely bat-shit insane, followed by a photograph at the end that gives a bit of insight as to the nature of the hotel and what it does to people, but it's all speculation as far as I'm concerned. The film perfectly balances need-to-know plot points with a vagueness that allows the fear to hold firm, and it's all done in a single setting with only a handful of people in complete isolation.

So, yea, The Shining is pretty fucking good, in case you haven't figured it out yet. On a totally unrelated note, I saw the Nightmare on Elm Street remake. What a pile of shit; I want my five bucks back.

Posted by Sir Phobos at 6:35 PM No comments: