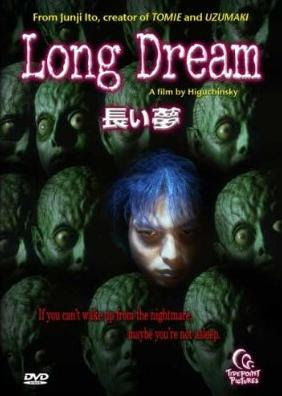 You know, there are some directors out there who I think would greatly benefit from sitting down and watching this movie. I check the budgets on a lot of movies, and most of the time I wonder to myself how the fuck $100 million can be blown through so easily. Higuchinsky, the director of Long Dream, would laugh at the people responsible for spending that much money. All of his movies were really low budget, but guess what? They don't need the money (granted, I haven't seen his last film, but I seriously doubt anything has changed in that regard). The sad thing, however, isn't how much money he has or doesn't have for his films. Believe it or not, he's only made 3 films.....ever. I'm pretty sure this qualifies as a national emergency, but I haven't seen any reports about it on the news yet.

Long Dream is about just that: a long dream. It takes place in a very dark and claustrophobic mental hospital, where two doctors are studying a curious patient. He came to them with a pretty fucked up problem. Every time he sleeps, his dreams seem to last longer and longer. In the span of, say, eight hours, he experiences days in his mind. At first. What starts out as a few days of experiences increases exponentially every time he sleeps. You'd be forgiven if you didn't realize the ramifications of this. He explains it best himself when he tells the doctors that one of his dreams was about him frantically searching for a bathroom for eight years. That's fucked. What if it's a horrible nightmare? It might end up being twenty years of swimming away from a gigantic shark, or god knows what. If that's not a scary premise for a horror/sci-fi flick, then I don't know what is. One thing I guess I should mention is the length of the film. It's only an hour long, so if you're looking for any kind of character development or complex plot, you'll have to look elsewhere. It's as straightforward as can be, and it doesn't bother with anything except being really weird. And I mean that in an exceptionally good way.

Higuchinsky is a very visual director, despite the low budgets he works with. Everything about his films, from the sets to the lighting and camera angles, is bizarre and other-worldly. Long Dream is no exception, and the green-tinted, narrow hallways of the mental hospital are foreboding enough, never mind what's happening in that dude's head every night. Also, Higuchinsky doesn't usually work with a lot of CGI. In Long Dream, it's practical all the way. I won't go into what kind of effects are used, but I'll let you imagine what might happen to a mind and body that experiences hundreds of years of existence. It's a crazy-ass concept, and it takes a crazy-ass director to pull it off with this kind of twisted confidence. To me, it's a must-see for any horror or sci-fi fan, regardless if you watch foreign films or not. It's just so fucking weird and creepy. I love it for the same reasons I love his other film, Uzumaki, but I'll save my comments on that one for another day. Instead, I'll leave you with this thought: a 100 year dream consisting solely of having sex with Naomi Watts. Or whoever, it's your call. Your wife, even.


This scene isn't very exciting, but it's the only one I could find that didn't show too much. When he wakes up, the doctor basically asks him if he was dreaming. He says yes, and the doctor asks how long it lasted. He says a year and a half.