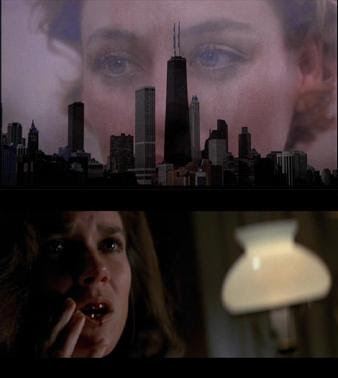 In my opinion, both Candyman and The Entity are both classics, but for vastly different reasons. If you were to watch them back-to-back, you would come away with two totally unique experiences. In the spirit of the season, I'll briefly give you my two cents as to what makes each film so great, with accompanying video and pictorial evidence for your perusal. The odd thing is that my latest horror kick really has nothing to do with it being October. Honest, I'm not lying to you. Anyways, here are two examples of masterpieces that should be on the shelf of any self-respecting horror fan.

Candyman is great for a couple of reasons. For one, it's a maccabre, grotesque piece of psychological horror that doesn't treat anyone - viewers or characters - like they are idiots. The early '90s was home to a few horror gems that sort of blended the old school with the new. Jacob's Ladder is another worthy example. And with Candyman, you have a tortured soul who ends up becoming the stuff of nightmares: A seemingly immortal spirit who claims his victims for the sole purpose of keeping others afraid of him. Yea, there's nothing complicated about his motivations. He's a sick fuck who gets off on hearing his name mentioned when someone is scared out of their mind. If he really existed, we'd all be screwed.


The first appearance of Candyman. It doesn't go so well for Helen. Candyman seems to be having fun, though. And Tony Todd is fucking awesome.

How do you prove to a smarmy psychiatrist that Candyman is real? Split him open from the groin and then fly backwards out of a window. Durh.

I said Candyman is grotesque, and I really meant it. I don't think I've seen another movie with as many guttings starting at the groin area. That's fucked up. The atmosphere is almost dream-like for the most part, and for brief periods the main character, Helen - played to perfection by a gorgeous Virginia Madsen - can't tell reality from what she can only imagine is delusion. But as she gets deeper into the shit, it's pretty obvious to her that she's not hallucinating. Candyman is real, and he wants her to be some sort of eternal hellish bride. I guess that wouldn't be so bad, if only there wasn't the whole burning to death after being stung by about a million bees. In any case, Candyman is permanently on my list of great horror films. Based on a Clive Barker book, the maccabre doesn't get any better than this (and Hellraiser). 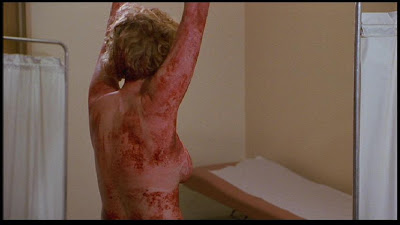 Is a sobbing Virginia Madsen, forced to strip while covered in blood, still hot?
No? 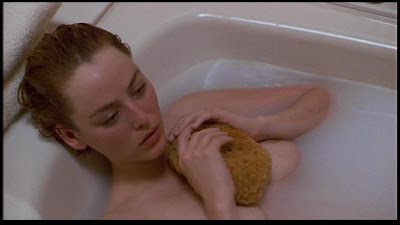 The Entity is pretty much the polar opposite of Candyman. There's no blood, no murdered slave back from the dead to wreak havoc, and not nearly as "sad" an ending. The thing that sets The Entity apart from other poltergeist or haunted house-type films is the brutality of the thing doing the haunting. It doesn't just move shit around and slam doors. In addition to those things, it also likes to literally rape its victims, repeatedly and without mercy. That's not very nice in my book. Carla is a single mom with three children, going to school while working a full-time job. In other words, just like a lot of other women. The only difference between them and her is that some kind of supernatural asshole keeps raping and attacking her in her own home.


Yes, both films have a bath scene. But The Entity's has more nudity and rape. I'm all for the nudity. The rape, not so much. It's quite brutal, actually.


One thing that I absolutely love about this film is Ron Silver's character, Dr. Sneiderman. He's Carla's psychiatrist, and also the best portrayal of a skeptic I've ever seen in any film. From the way he goes about trying to help Carla to the actual conclusions he reaches, he is pitch-perfect in showing how someone with reasoning based in the real world works out problems. I love it.


Here is a fantastic scene (my favorite of the whole film) in which Dr. Sneiderman tries his best to show Carla that it's all in her head. In normal circumstances, I'd be behind the Doctor all the way. But he's obviously not in the loop in this story.

The only thing that The Entity has in common with Candyman is the similarly hot leads. Barbara Hershey, like Virginia Madsen in Candyman, simultaneously does an amazing job with her character while being easy on the eyes. One thing takes skill while the other comes naturally, but to have both at the same time makes it that much more special. 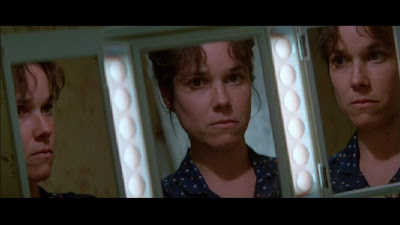 Initially, Carla goes back-and-forth in her belief that she's making it all up in her own head.

I'll also quickly mention another aspect that both films share (ok I lied about them only having one thing in common). The scores are uniformly excellent. They both convey the overall emotions of each film to a T, and without that quality, the content of both would suffer. I can't stress enough how important the music is to a film that is relying on emotional investment. Bravo to both films and the filmmakers who had enough self-respect to not shit all over themselves in that department.

Alright, so you've seen the clips and read about how awesome both of these films are. If you've already seen them, then you can just relish in what a good decision maker you are. If you haven't seen them, you now have an opportunity to give yourself a lot of blissful happiness. It's up to you, but I'd recommend blissful happiness over, well, anything else. So what's it gonna be?