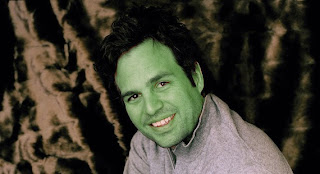 Anticipation is high for Joss Whedon's super hero mash up "The Avengers," but Incredible Hulk fans were only given a brief tease of the jolly green giant at the end of the trailer. Two unique versions of the gamma powered goliath have appeared onscreen, and geeks are getting curious about which version Mark Ruffalo will be playing. Will it be Ang Lee's much vilified take or the rebooted version starring Ed Norton? Ruffalo spent a little quality time with GPS recently and gave us the answers inquiring minds want to know!

Ruffalo won the role after negotiations with Norton went south, but according to the new Hulk, one man's loss is another man's gain. "Ed can eat a dick," Mark told us emphatically. "As a matter of fact I think he actually does in Death To Smoochy. Did you ever see that shit biscuit of a film? I'm ecstatic to be the latest and the greatest version of Bruce Banner!" 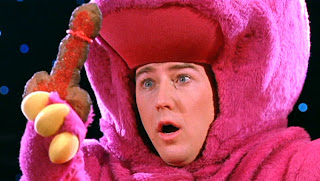 Norton the one eyed one horned flying purple penis eater in "Death To Smoochy"
We were happy that Ruffalo wasn't going to be pulling any punches during our conversation with him. As for which Hulk we'll be seeing this summer, the actor was happy to inform us that he's a huge fan of Ang Lee's version. "You might not know this, but I actually tried out for Heath Ledger's role in Brokeback. I'm a huge Ang Lee fan so I gotta go with his moody take.....plus I fucking loved HULK!" To better prepare for the role, Ruffalo has been hanging out with Lee and former Hulk co-star Nick Nolte so he can ascertain their memories of the material. But has it helped? "Lee is amazing. The guy gave me his old script for me to study, and he's really giving me great insights about the Greek tragedy super hero tale he tried to present to the woefully stupid audiences that didn't appreciate it. As for Nolte, we met for about twenty minutes, but he was drunk as a skunk. His breath smelled like Jack-Daniels mixed with rotten ass, and I couldn't understand a word of his gibberish." 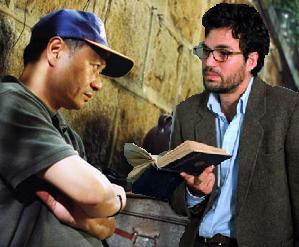 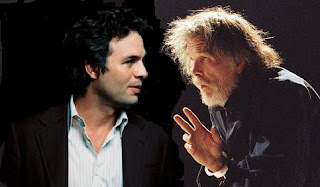 Mark attempts to decipher the ass breath gibberish of Nolte
The trailer seemed to indicate that Loki will be the super villain that the Avengers will have to thwart, but Ruffalo claims otherwise. "It's the ole bait and switch trick," Mark said in a playful tone. "Let me just tell you that Loki is mauled to death by Ang Lee's Hulk dogs and the Avengers have to save the world from them! They've never been properly spayed or neutered so now there's thousands of mutated super poodles to deal with." When asked why he wanted to continue the character arc that Lee envisioned despite much fan contempt, Ruffalo wouldn't back down. "Fuck the fans......I'm Hulk.....I'm the ultimate Avenger here to avenge Ang Lee!" 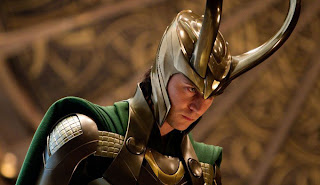 fans may be pining for Loki to be the big bad..... 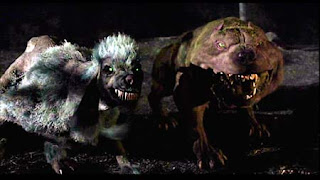 but fuck them.....Hulk dogs are back and breeding like wild!
It will be interesting to see if the fans can embrace a version of Hulk that has been much hated over the years, but we're confident that Ruffalo will be able to make them see Ang Lee's adaptation in a whole new light. GPS simply cannot wait for "The Avengers" to assemble in 2012.
Posted by MarkusWelby1 at 5:09 PM