I'm trying something a little different this time. Instead of picking just one birthday and making a post about that person, I'll list the people I think are notable and showcase the one I feel is most worthy. Let me know if you guys prefer it this way or the way we've been doing it up 'til now. I also realize this has been a very sporadic thing so far, and it probably will be until someone else wants to do this every single day. So for now, I'll just do it when I feel like it. Like today. Hooray for birthdays!

Most worthy for October 8th: 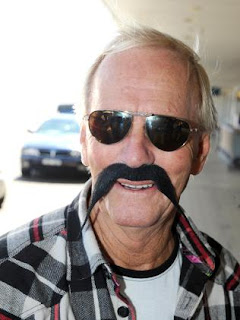 He hasn't really done jack shit besides Crocodile Dundee and Almost an Angel, but you know what? That's exactly why I picked him. Man, he's aged well, by the way. Little did you guys know that Hogan has been battling the Australian Crime Commission and Australian Taxation Office for allegedly funneling a shit-load of money into off-shore accounts. The whole thing seems like a mess, but it's interesting. Wikipedia.


The only actual clip on YouTube is the knife clip, which is too culturally relevant for my hipster tastes. Here's this instead.

That's all I got for Paul Hogan. Here are the rest of the birthdays:


Matt Damon (41) - Coincidentally, I just did a post with him in it, so I passed on showcasing him. Obviously, he could have made it otherwise.

Sigourney Weaver (62) - Another one that could have easily made the showcase, but she wasn't in Crocodile Dundee, so tough shit. Sorry, Sigourney. Loved you in Copycat.

Chevy Chase (68) - He hasn't done anything since, umm, that one year a while ago.

Jeremy Davies (42) - I seriously considered Davies. He was great in Solaris, Rescue Dawn, and Lost. Again, no Dundee, no showcase.

Michael Dudikoff (57) - Wow, he's been silent for the past 8 years. Time for an American Ninja re-boot.

Darrell Hammond (56) - It was very hard not to pick him just so I could throw up some clips of Sean Connery in Celebrity Jeopardy. That is, if I could find any clips. Thanks, N(azi)BC.


And so today's birthday wishes come to a close. I didn't actually wish them a happy birthday, but I guess I just did. I also spared you readers the Crocodile Dundee in L.A. trailer. Holy shit...go look it up for yourselves if you really need to.