Currently Obsessed With: The Mimic Series 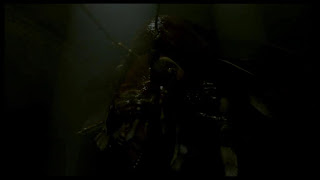 The original Mimic was Guillermo del Toro's first English-language movie. God bless that man. It's one of the best creature features around, and it's held up remarkably well in the fourteen years since it came out. The director's cut is out on Blu-ray, but I haven't picked it up yet. Don't worry, I plan to. I've been thinking about this series for the past three days or so, and I still can't get it out of my head. I just finished watching Mimic 2, and while it's the least in the series, there are definitely some things worth discussing. I already reviewed the third movie, so I'll only gloss over that one here. You know what? I seriously would not mind a fourth Mimic movie. Does that sound crazy to you? It might be, but if it was given to another unconventional director with an eye for suspense, it could be pretty sweet. As the series stands, it's a good bunch of horror movies, and each one has something different to offer the brave souls who crave giant cockroach action in their movie-watching diet.

Most of the people who come to our little corner of the internet don't leave comments, so I don't really know the demographic. I mention this because I wonder what younger viewers would think of the effects in this movie. It was made in 1997, and there are plenty of '90s CG movies that look absolutely horrible nowadays. Thankfully, Mimic isn't one of them. Both the CG and the practical effects still impress the shit out of me. I guess that shouldn't be too much of a surprise considering Guillermo del Toro is a visual genius. The effects go a long way in selling the horror. I mean, look; giant cockroaches in sewers. They have to look awesome. 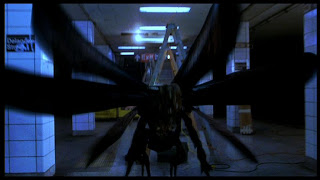 The first unveiling of the evolved Judas breed is one of the most iconic monster reveals for me personally. I won't get dragged into a debate about it. This is terrifying.

The rough sketch of the plot of Mimic doesn't read as something very unique or engrossing, but its glory is all in the presentation. Del Toro is a master storyteller, and he uses believable, sympathetic characters to evoke emotions. He certainly evoked mine.

On a side note, what the fuck happened to Mira Sorvino? She was so, so good in this, and I quite enjoyed her in a small number of other movies in the mid-to-late '90s. She's been acting ever since, but only in a bunch of crap I've never heard of. Go IMDB her and you'll see. At least Romy and Michele wasn't the highlight of her career.


You know a movie knows what it's doing when, for a minute-and-a-half, the entirety of a character's dialogue is "What the fuck is that?" and it makes absolute sense. Damn, I love it.

My heaping of praise upon this movie must come to a close before I pass out. I tend to write my stuff right before I go to bed, but I only force my eyelids open, Clockwork Orange-style, if it's something I really care about. Mimic is just such a thing. Go watch it.

Firstly, I have to apologize for not having much in the way of media available for this one. I don't have the DVD, so I just watched it on Netflix Instant. By the way, all three movies are available on Instant, so check them out. Anyways, my hope is to be able to delete this paragraph in the near future and replace it with some stills and maybe a video or two. In the mean time, I'll do what I can with Google images... 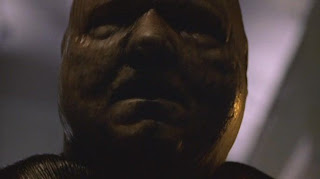 Context makes this face so much more fucked up. I just puked a little in my mouth.

I'm just going to give this one to you straight. Are you ready? Mimic 2 is about a giant, human-sized cockroach that wants to fuck a woman. There; I said it. I feel better now.

It takes a while for that concept to really take off, but once it does, it kind of gets under your skin. Or maybe just mine, I don't know. The movie as a whole is pretty shitty, to be honest. It's really only once you figure out the extent of that concept that it gets really disturbing. Unfortunately, that only happens towards the end of the movie. 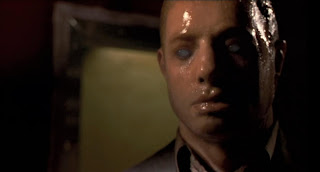 This is a cockroach pretending to be a human being in order to mate with another human. I TOLD YOU IT WAS FUCKED UP.

As grotesque as that shit seems, the rest of the movie doesn't hold up to how the last ten minutes plays out. The female lead is a shitty science teacher who only inspires depression and nihilism; she can't relate with men because she incessantly rambles on about female insects and their external genitalia; there's just nothing redeeming about her or her stupid face. Oh, except when she has to act all tough and matter-of-fact. Then, she's a capable protagonist who gets the job done. Ahhh, fuck off. In fact, there aren't any likable characters in the entire movie. Everyone is either a douche or a caricature (The cop is played by a poor man's Costas Mandylor), and I was constantly begging the story to hurry up so I could at least write about it before I passed out on the floor. Hey, I made it, so that's a notch in the win category.

That's all you get for Mimic 2. It has an initially retarded concept that's only ever realized in a disturbing way just before the end credits roll. It's a shame, really.

I already reviewed this, so I just want to show one image that I find hysterical. Right after the opening credits, newspapers are flashed across the screen that are supposed to give the audience a little bit of context as to what's been happening with Stricklers' survivors. Yea, well, guess what? J.T. Petty has an awesome sense of humor, so this is what the newspaper clipping actually says: 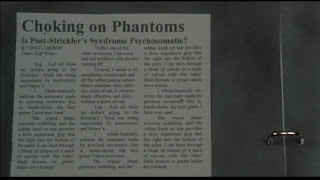 It's probably too blurry to read on your own, so I copied it all down:

Headline: Choking on Phantoms
Bi-line: Is Post-Stricklers' Syndrome Psychosomatic?
Article text: "Yep. And all those tax dollars going to the Stricklers' fund are being squandered by pantywaists and Nancy's.
I whole-heartedly endorse the statement made by previous reviewers this is, hands-down, the best grater I have ever used.
The tripod slope prevents wobbling, and the rubber knob on top provides a firm, ergonomic grip that fits right into the hollow of the palm. I can burn through a block of cheese or a stack of carrots with this baby! Hash browns or potato latkes are a breeze."

It goes on for a paragraph or two more, then just repeats the same thing for the entire page. That's comedy, folks.

Alright, so if I haven't convinced you that the series is worth checking out, you're a lost cause, and I should spend no more time on you. It's in your best interest as a horror fan to give these movies a shot.
Otherwise, you never know...a 6-foot insect might like the way you move that groove thang.

[Edit] I have no idea why, but whenever you click on either of the Mimic 2 images, it enlarges one of the other pics that you didn't click on. Not the one you want to look at. I don't know what to tell you. Blogger is fucking up. Sorry.]