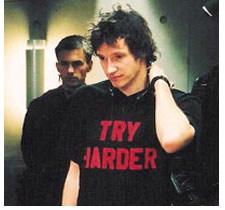 There's always discussion between myself and Markus about how some filmmakers are just pretentious and boring. They tend to make bloated, obtuse films that only make sense if you know ahead of time what to look for. Call it high art if you want; I don't really care. The reason I bring that up is because even though we like to make fun of the snooty crowd, the opposite end of the spectrum is just as bad. How do I know? Paul W.S. Anderson just proved it to me with Resident Evil: Afterlife.


I actually had a plan. It was a pretty good plan, or at least I thought it was until I ran into this video game-inspired train wreck. My plan was to watch every Paul W.S. Anderson movie starting with Mortal Kombat. I made it though that one successfully, and I also watched Event Horizon. Now, I had already seen both of those years ago, but I needed to refresh my memory. One held up decently enough, and the other plummeted like Goro off a cliff after getting kicked in the (presumably) four-testicled nutsack. Even so, I was still all hyped up to continue this crazy experiment of mine - I took notes and everything. But all those aspirations flew right out the fucking window as of about half-an-hour ago. I'm going to get to RE: Afterlife shortly; I still want to talk about Mortal Kombat and Event Horizon first. I'll be damned if I'll allow the last two nights of hope to be dashed against a rock quite so easily. Instead, I'll go ahead and give my thoughts on Anderson's first couple of outings, then fast-forward 14 years later (now) and see just how far he's come as a director. Ready? Good. I'm all fired up.

September 13th, 1993. I remember it well. It was Mortal Monday, and I was ten years old. The original Mortal Kombat had released that day on the Sega Genesis, and it was delivered right to my doorstep. I have a clear memory of rushing through the back door and making a bee-line for the front porch. I opened the door, and sure enough, the package was sitting on the ground, waiting to be opened. I'm pretty sure I let out some ten-year-old male version of "SQUEEEE!!!" *swoon* as I feverishly ripped the box open to reveal the greatest thing since things began existing. This was Mortal Kombat, mother fucker. IN MY HOUSE. It was time to bicycle kick people in the chest with Liu Kang, and perhaps even dabble in some Kano heart-eating. Yes, he totally eats his opponent's heart after he rips it out. Go YouTube it.

Just in case you haven't got the plot yet, I loved that shit more than my own mother (Mother, in case you're reading this, go ahead and chalk that up to hyperbole.). At the time, either Midway, Acclaim, or Sega was running a contest that had something to do with beating the game. I can't remember exactly what it was about, but it entailed beating the game and then taking a picture of the end-game screen. Yes, that was before the internet. ZOMG, I know. I had to take a picture, get it developed, and snail mail that shit in a truck and everything. The point is, I did it. I beat that game. Over 200 times. I could go on and on about this, but I just wanted you to understand how much of an MK fan I was back in the day. When the movie came out, I was all over that shit like I had stock in New Line. I loved the movie. I mean, holly shit, Sub-Zero was in it, and he was my favorite character. I even dressed up like him for Halloween one year, and that costume is still sitting in my closet back home.

So, how does the movie hold up now that I'm a grown-ass man? Not so well. It kind of sucks, actually. Time to break out the notes. Let's see...what was bad...what was bad...ah, yes. Everything.

OK, not literally everything. The one cool thing about Mortal Kombat is the Goro puppet. I don't know exactly what the hell was going on with that thing, but there were about 4 or 5 puppeteers listed in the credits. The lower half was an actual dude walking around, and the upper half was some kind of movable monster torso. The eyes moved around and bulged out, and the mouth made decent attempts at lip-syncing to the dialogue. 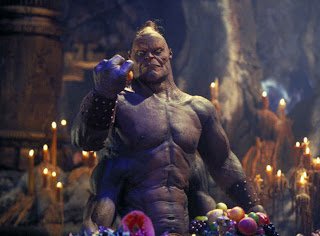 Aside from Goro, nothing else really worked. The number one reason to watch a Mortal Kombat movie would be for the fights, right? Right. Too bad, then, because they were all lame. First of all, seemingly half of them took place for no reason whatsoever. The tournament would be happening in one location, but...just because...the main characters would wander off and get into these battles of attrition to see who could suck up the most screen time with punches and kicks I could have blocked back in '93. The only reason they were there was so that Sub-Zero could fight Liu Kang (Umm, fail. Sub-Zero should fight Scorpion, you assholes.), and so that the movie's runtime could reach a respectable length. Otherwise, the thing would have been like 20 minutes. In and out, back in time for Corn Flakes. But no, Paul Anderson really, really wanted you to watch Johnny Cage and Scorpion fight in a bamboo forest out in the middle of bumfuck nowhere, for bumfuck no reason. That reminds me, the rules of Mortal Kombat make no sense. The humans win in the end, but Shao Khan still storms the place, crushes a building, and calls everyone dicks while yelling about taking over the joint. Where are the Mortal Kombat police when you need them? I'd even take Stryker if he was available at the time, or at least something like the vegan police from Scott Pilgrim. Coincidentally, Thomas Jane would have made a better Raiden. More on that in a minute.

Anyways, the fights weren't lame only because they were nonsensical. On the whole, the choreography was also pretty asstastic. At least once per fight, one guy would do his defensive block like a full second before the other dude even attempted the strike. The one on defense would just hold it there like a tool and wait for the striker to place his arm neatly inside his raised arms. Either that, or the punches would just look staged and shitty. It's almost as if some of the stunt guys couldn't get the routine down at full-speed, so they just said fuck it and filmed it at three-quarters.

One of the most obviously poor choices was, you guessed it, Christopher Lambert as Raiden. Bizarro casting aside, though, Raiden was the most unhelpful douche ever. He would drone on and on about no one being "ready," but he wouldn't ever teach anyone shit. Seriously, all the guy did was mosey on over whenever Shang Tsung did something obviously too dickish to let slide. There were no training montages. In fact, there was no training at all. I mean, it's not like a video game or something where you can just keep trying over and over until you beat the son of a bitch. Maybe it is, I don't know. It sure as hell didn't matter in this movie.

I've written just about all I can about Mortal Kombat, save for one last thing that kind of irked me. Throughout the whole movie, Sonya Blade was portrayed as a strong-willed, independent woman who could take care of herself and kick anyone's ass. It was misguided from the start, because I really don't believe a strong female character needs to be able to scissor-kick anyone. Plus she's a bitch. That's not being strong, that's just being a bitch. But if you're going to go that route, you have to go the whole way. At the end of the movie, she was relegated to a damsel in distress, replete with messy, "sexy" hair and a pseudo dress. Look, don't give me your shit about this being Mortal Kombat and that I should calm down. I get it. I'm just saying that if this movie had any higher aspirations, I would be offended. But it didn't, so whatever. She looked hot in her stupid dress. Alright, I'm done with this one. On to the next.

You can look forward to me discussing Event Horizon when I get around to part 2 of this amazingly epic tale of one shitty director getting even shittier as the years crawl by.