Currently Obsessed With: Attack The Block (2011) 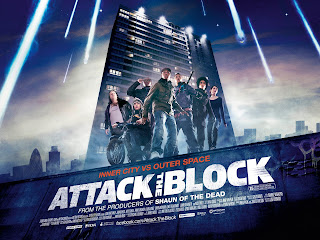 I've been hyped about this one for quite some time. Back in June, I arrived over an hour early to a special screening and still couldn't get in to see it. I tried renting it from my local Blockbuster and every copy was checked out when the DVD was released this week. Even a good majority of local Best Buys were completely sold out. The situation was getting crump. Find out the definition of crump from our good friend Scott at Front Room Cinema who was kind enough to break down some of the various slang our heroes use in the film. On my last hail-mary attempt, I was able to find a copy for purchase. I immediately headed home to cotch down and check it on my flatscreen. The invasion was well worth the wait!

"Attack the Block" gives the alien invasion premise a much needed shot in the arm, and it's difficult to write about because the less said the better for those who haven't seen it. Just going by the trailer, you can easily figure out that a South London youth street gang is tasked with defending their neighborhood from alien invaders. I had heard rumblings that this movie was going to be given the ole Yankee remake treatment because of the slang the kids used in the film. I'm so happy the powers that be decided not to tamper with it. These young actors make the story so special and unique, and when they're in peril on screen, you'll be biting your nails till they're out of harms way. Take it from me fam, "Attack the Block" is proper nang.

Who's there?.....I wish it was only Landshark