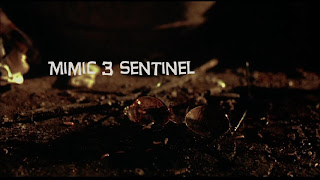 When you think of the third entry in any horror series, what do you think of? A lot of the time, if a franchise makes it to that point, it's done so by dumbing-down the story and/or simply adding buckets of gore. Not so with Mimic 3 Sentinel. Directed by J.T. Petty, the movie is - get ready for this - Rear Window with giant cockroaches. Does that raise an eyebrow? It should.


J.T. Petty doesn't have a large body of work. In fact, I don't think I've ever seen anyone mention him when discussing horror movies, which is a little strange to me. Sure, he makes low-budget, sort of bizarre movies, but he makes up for having little money with pure talent and creativity. I reviewed his first movie as well.

Mimic 3 Sentinel is about 24-year-old Marvin, who's one of those guys that is hyper-sensitive to just about everything in the environment. As such, he mostly stays in his room, looking at the neighborhood and snapping pictures of everyone with his camera. Like Rear Window, you're shown a bunch of different characters inside their apartments, doing whatever they do. Marvin has all the photos he's taken tacked up on his wall, and he even assigns names to the people he's unfamiliar with. 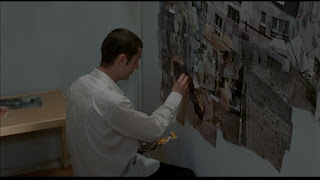 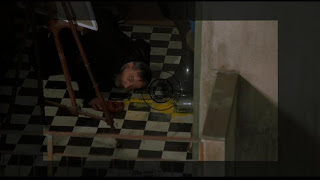 Don't ask me...this is the weird guy across the street.

Since I'm not exactly trying to review the movie, I'll leave the plot at that. There are a couple of good character actors in this, and Lance Henriksen makes an appearance as well. He's not really in it much until the end, but once he's there, he's a right bastard.

I mentioned the direction this movie takes being different than the previous ones, and one thing you should probably know is that it isn't a scare-a-thon. I haven't seen the second movie yet, but I can compare it to the first, which had tons of CG work in it. In Sentinel, CG is only used when it's absolutely necessary. I mean, at some point you're going to want to see the roaches unfold their wings and stab some faces, right? They do, but very sparingly. Until the end. I can't say what happens, but holy shit. All the tension that was building for the past hour seemingly erupts on-screen.


This is the opening scene, which is a good indicator of the tone the movie takes.

Sentinel is really all about Marvin and his sister. There aren't any token characters in the movie at all. There's no plucky comic-relief, no one who's "seen this kind of thing before," and nobody who really knows what to do when things go bad. It's about normal people suddenly being confronted with something horrific. The Rear Window concept really sold the movie for me. I love the way it uses perspective, and a lot of the time the roaches are only seen from across the street through Marvin's camera.


I love the way these scenes are done. I hate those unmoving, black shadows. I know what they are, and they won't squish under my shoe.


There's not much more I want to say about this. It's slower-paced than the original, and the scares aren't plentiful. A quick admission: I fucking HATE cockroaches. Growing up in Texas, they came in several varieties. Some were really small and it was no big deal to just squash it under foot. But others were the size of your pointer and middle fingers put together, and they would fly at your face, attempting to get into your hair. That is disgusting beyond belief. I had many a battle with them on my grandparent's stairwell. You know, I should have a Purple Heart or something now that I think about it. So my uncompromising fear and loathing of bugs and insects might make me enjoy the small outbursts of full-on roach terror more than others, but I still think the movie's tone, concept, and slower, more character-driven aspects make this a worthy third entry in the Mimic series. This turned out to be a review, which is alright, because I want as many people to see this as possible. Maybe it's not scary enough for some, but I'd like to know your thoughts either way.

So what do you think? I'm also curious to  know if there are any other third movies in a horror franchise that surprised you with its quality. I have a couple more of them in mind, so I might go over them before the month is over. Check this one out when you get a chance, though. It's not your average direct-to-video sequel.
Posted by Sir Phobos at 1:43 PM