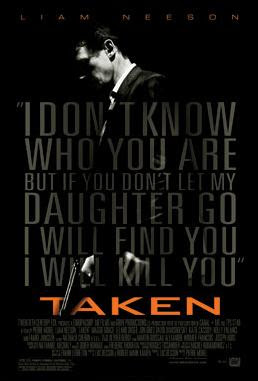 Taken is everything you could ever ask for in an action movie. If you've seen District B-13, you know what the director, Pierre Morel, is capable of. I'd need to watch B-13 again to give specifics, but he injects the genre with a much needed freshness that only comes along once every five or so years. He frames fights in a such a way that you can see every single hit, and you know exactly what is happening at any given moment. The Bourne movies were great, but sometimes you couldn't tell what the hell was going on during the fight scenes. Not so with Taken. The attention to detail is incredible, and Morel is a rare example of foreign filmmakers making the leap to American film with no love lost.


The plot is nothing out of the ordinary: Liam Neeson is a retired government agent whose daughter decides to spend the summer abroad in Europe. Traffickers kidnap her, and it's up to him to find his daughter and exact vengeance upon those who stole her from him. It's been done before, but not to the precision that Taken demonstrates. The film doesn't waste a lot of time getting started, and once it does, the tension ratchets up and doesn't stoop to any of the bullshit that often plagues these types of movies. 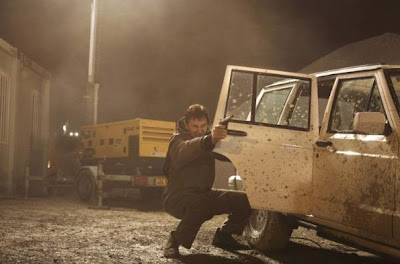 Before the movie started, I was treated to a trailer of an upcoming movie called 12 Rounds. It stars John Cena as some police dude whose wife is kidnapped and nefarious things are planned - there's something to do with a bomb strapped to someone, there's lots of explosions and time is running out. It looks like an extremely low-rent version of Taken. That just goes to show that you can't have any ol' buff dude running around crying about his family and punching people in the face to make a successful film. Taken gives all the background information you need to know: Liam Neeson is a badass spy type, and you don't want to fuck with him. He spent his entire career protecting his country from evil, and a bunch of pimps aren't going to get away with taking what's dear to him without getting fucked in the face. And believe me, faces get fucked. I mentioned the framing of fight scenes earlier, and when you see it done right, it really makes a difference. There's no endless shaking of the camera to the point that everything is a giant blur of fists and blood. Instead, you know exactly what punches and blocks are executed the whole time, and the fights have an immediacy that is only equaled by the perfect distance the camera keeps from it.


And it bears mentioning just how goddamn awesome Liam Neeson is. At 56, you wouldn't know it from looking at him. He moves and behaves like someone in his early 40's, and his action sequences rival anything Matt Damon or Daniel Craig has ever done. It makes the fight scenes at the end of A Phantom Menace almost worth going back and watching, just to see him kick ass. Almost. Another thing this film nails is the stunt work, or lack thereof. There are no death-defying car leaps off of bridges to catch up to the bad guys. Everything Liam Neeson does is pretty much within the realm of reality. He goes from clue to clue until he gets the information he needs, and the people he intereacts with are nothing more than conduits; once he gets his information, there's no need to keep them alive. This movie is rated PG-13, but it's a pretty fucking hard PG-13. People are killed indiscrimenantly, and you'll find yourself shocked by what happens a lot of the time.

I don't think any more cajoling is necessary to get you to see this film. If you like action movies at all, this is a fucking MUST see. Death Sentence with Kevon Bacon is a movie in a similar vein, and the craftsmanship is the same in both offerings. There's no extraneous bullshit, no melodrama, no moral quandries about killing the bad guys. Everyone involved with the horrible human trafficking is fair game for a bullet to the head, and they get what they deserve. I can't stress enough how refreshing it is to watch something like this, and I can only hope it does well enough at the box office to encourage more films of the same quality to be green-lit. Stop reading right now, check your local listings, and go see Taken as soon as possible. As an action junkie, there's nothing else I can say to you except you're missing out on a great start to 2009 by not plunking down your 10 bucks for a great night's worth of entertainment.