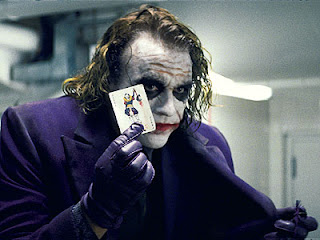 On the one year anniversary of his passing....Heath Ledger is nominated for an Oscar for his portrayal of the joker. Let me be the first to say that I thought he was a great talent with a body of work that started with teeny bopper crap and ended with more meaty roles worthy of his promise as an actor. I do however feel that we shouldn't give him the golden dude just because he's dead....especially when there are other actors on the nominee list whose careers could benefit by winning the best supporting actor nod.


Consider Robert Downey Jr. for a moment. Here is a guy that has fought his own personal battle with drugs and alcohol and lived to tell the tale. His rise back to the creme of the acting crop is feature film worthy itself. Yes, the extreme method actor Kirk Lazarus that he plays in "Tropic Thunder" is ridiculous, but is it more so than a guy playing a comic book character with green hair and messy clown make up? 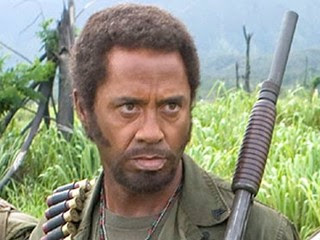 Downey Jr. as Kirk Lazarus playing Sgt. Lincoln Osiris
Or what about Josh Brolin? His performance as Dan White in "Milk" gives us an interesting glimpse of the man who in the 70's assassinated gay rights activist Harvey Milk. Surely this insight into a piece of history that many people were perhaps not aware of should be considered when deciding. 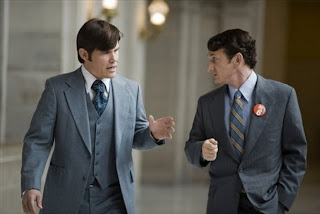 Brolin and Sean Penn in "Milk"
In the end, I just don't want it to be a sympathy win for Heath. I want the academy to truly feel that it was the performance of a disturbing anarchist on the screen in "Dark Knight" that takes the statue. If they decide the Joker is better than a white guy playing a black guy....or someone playing a historical figure then I'm ok with that. Rest in peace Heath. (comments very welcome)