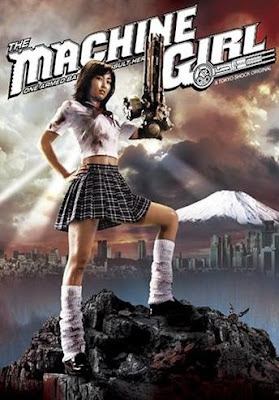 Machine Girl -- she's a girl with a machine gun on her arm. It's not a concept that should lose you in its translation to film. At least I hope not, because with a title and cover art like this, I think the filmmakers gave away the entire plot. If they had named it something like "Happy Fun Time School Girl Action" and just put bullet holes through the words, you'd be wondering what the fuck is going on. But no -- they went the spoilery route, so here we are with Machine Girl, a film about a Japanese schoolgirl who loses her arm in fierce, vengeance-minded combat and gets it replaced with a mini-turret. Alrighty then, sign me up for the next 2 hours, please. 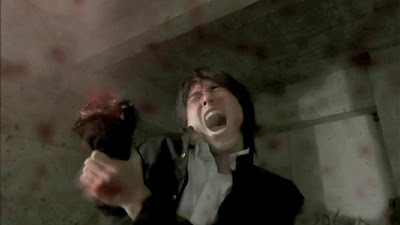 Its George Lucas-sized budget is pushed to the limits within the first 3 minutes of the movie, and it's a good thing, because I don't know if heads being ripped apart by machine gun bullets will ever be shown with more realistic detail. The beginning of the movie isn't really the beginning, though, so I'll skip to where the plot actually starts. Her name's Ami Hyuga, and her brother was killed by some schoolyard bullies. The leader is the son of some yakuza dude, and in Ami's road to vengeance she finds this out and goes after the brutal sons of bitches that murdered her dear, sweet half-retarded brother. 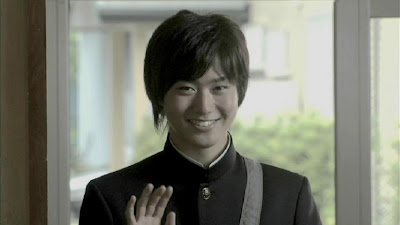 In the process, she also finds out that she sucks at fighting yakuza, and gets chained up and her arm chopped by an anime-looking dude with a sword. I think he was the father of the kid who killed her brother, but whatever. 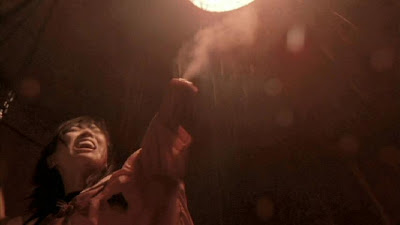 In her post one-limb state, she comes upon the help of a couple who also have an axe to grind with those dirty pirate yakuzas. There's something in the plot about Ami's family being hated for some reason, but I was too busy staring at her sexy stump to file those facts in my memory banks. Anyways, after some reluctance, they help her out by building her a machine gun that apparently doesn't attach to any of her nerve endings, but somehow still fires on command. Whatever, they convinced me because the guy had drawings of it on paper so it must be logical. So they go on about training her to use her miraculous new weapon of mass killing in the hope of taking down said pirate yakuzas. Some more stuff happens and then they get to the final showdown. I don't remember what happened in between, but it probably wasn't pretty. Ah, yes. Some bits are coming back to me now. 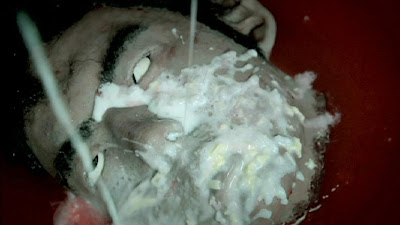 So they get to the final showdown, and guess what? Ami triumphs over dirty pirate yakuzas, and the world is full of sunshine and rainbows again. Or something. She wins, I remember that much. Machine Girl is somewhat of a difficult movie for me to recommend. It wears its aspirations on its sleave, or lack thereof -- sometimes to its benefit, but other times to a fault. The gore, provided by the aforementioned Lucas-sized budget, does what it does. Severed heads are puked on like I showed you above, and there's a fuck-ton of blood and guts all over the place. Not to mention there's a generous amount of Ami up-skirts. I sure as shit demanded that be included, so her white-pantied crotch is one thing I checked off my list. Machine Girl is not something I would plan a week in advance to watch, but if you ever find yourself with nothing to do for a couple of hours, pop it in and marvel at the metal spinning titties of this dirty pirate yakuza chick. 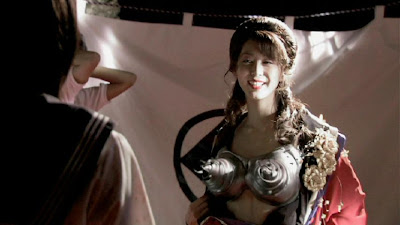 And here's a few minutes of the opening for your viewing pleasure:


I watched it in Japanese, but for my purposes, it's more fun this way.