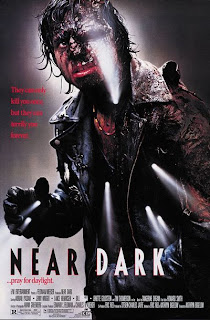 Ladies always seem to love the bad boy in town....you know...the one in the rock band...or the guy who has been to jail a couple of times for pedaling dope. It seems that nice guys...do in fact finish last. Caleb is one of those nice guys. He spends his days working on his father's farm and the nights cruising for girls in the streets of the podunk Oklahoma town where his family lives. He's probably one of those guys that would eventually marry the first gal who gives him a friendly glance...have a bunch of kids...and spend the rest of his days on the farm...never to venture too far outside the county lines. But a strange thing happens to Caleb on his way to obscurity.....a beautiful stranger named Mae visits the local DQ on a lonely summer night and turns his world upside down.

In an unusual reversal of roles...Mae is the bad girl....and she just happens to be looking for a strapping nice young man like Caleb. She's not really bad by choice...more by circumstance. The two hook up and all seems to be going well for Caleb. They spend the pre-dawn hours hanging out and flirting nicely, but then Mae gives him a bloody peck on the neck and runs off into the dark. Now things really heat up.....literally! You see...Mae has a supernatural curse that causes her to have an unhealthy appetite for human blood (I guess there's not really a healthy one) and when the sun is out...she'll also catch on fire and explode. By biting Caleb...Mae has bequethed to him this wonderful gift. Now with the morning sun blazing overhead...Caleb suddenly has a burning sensensation worse than any case of clap in recorded history. He stumbles out of his pick up on the way home...body smoldering...his father and sister see him and notice something is not right...but before they can help...he is whisked away from behind in a speeding winnebago. Welcome to your new family Caleb!

Caleb suddenly finds himself in the company of other cursed individuals. There's the leader Jesse (Lance Henrickson)... the leather clad biker type from hell Severen (the great Bill Paxton) and also a mothering figure named Diamondback (Jenette Goldstein...all you need to know is that she was Vasquez in James Cameron's Aliens). Normally they would just kill and eat a guy like Caleb...but they see that the curse is making its way into his body....and for some reason...they don't kill their own.....they just indocrinate them into their motley crew. The curse also keeps a person from aging which is why the little brother of the group Homer (Joshua Miller...he was in River's Edge) never appears to get any older even though he is well into his golden years by human standards. From here on...Caleb needs to learn to live constantly on the run as they do....they are the last of their kind...they are constantly hunted....and their only requirement for nourishment is human flesh and blood. Will Caleb's attraction to Mae motivate him to get up and go along....or will he seek an opportunity to leave the bloodthirsty outlaws and reunite with his father and sister who are in hot pursuit? It's one hell of a ride finding out!

One of the greatest overlooked horror films of the 80's now seems to be finding its stride a couple of decades later. Many viewings on VHS, cable, and now DVD have put "Near Dark" into cult status. It's a horror movie....road movie...western...love story...what more could you ask for in your entertainment? Take notice of the best set piece in the movie that has the gang slaughtering a bunch of rednecks in a dive bar...Bill Paxton chews the scenery and the customers here! There's also a shootout with the cops and an attempt to cure the curse with blood letting...pure genre bliss! Director Kathryn Bigelow never soared higher than with "Near Dark" although I do take guilty pleasure in her greatest movie about bank robbing surfers ever "Point Break."

One of the best things about this film......is that never once do they use the word "vampire" to explain their condition. That's why I never used it in this review.....oh shit...I just did.