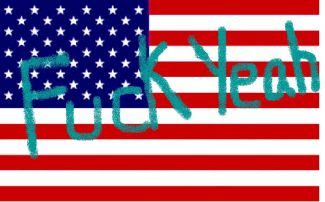 I've spent a lot of time on this site talking about foreign films. I've waxed poetic on German, Japanese, Korean, Chinese and Spanish films, with, if memory serves, only two American offerings. However, if you read my Gran Torino review, I think you could see my deep appreciation for the American Icon. And by writing this, I want to expand on the idea that American film has carved itself a huge piece of cinema history.


Let me start by describing one of the reasons our films have hit such a nerve with people all over the world. If you ever travel abroad, there might be a situation where you're talking shop with a film lover of another country. You might start by mentioning local directors, or what's hot at the moment. But as the conversation progresses, you find yourself digging into movies where you don't even have to mention their names to get a tremendous response from them. You might say something like, "Have you ever seen any of the Rambo..." "Ah, Rambo!" would be the response from the man of foreign persuasion, before you were even allowed to finish your sentence. He would then make a knife-jabbing motion with his hands, smile with that shit-eating grin that only someone who's seen something way too many times could make, and then give you the thumbs up. Good times.


That's what I mean when I say the American Icon. The actors or characters that don't need an introduction, no matter where you happen to be. The movies that, after you finished watching them as a kid, you would immediately head to the back yard to re-enact your favorite scenes, yelling and screaming while running back and forth with a stick or a piece of plastic as a substitute for whatever the famous weapon of choice might have been. This is what I point to when film snobs tell me American movies suck, and I'm not cultured enough to appreciate the finer things in life. Fuck you, my friend, where have you been for the last 30 years?


And with that sentiment laid out on the table, I'd like to present my case for understanding the great American Icons of the last few decades, and why they're still relevant today. I'll start moving forward chronologically, so as not to disturb the memories any of these characters or movies might hold for whoever decides to read this. I'd also like you to make note that you've probably already seen all of the movies I'm going to bring up. Otherwise, there's no point in writing this, and I can go back to watching my Ingmar Bergman box set, thank you very much. And if I miss something, it's not a slight, unless you bring up a movie so obscure or out-dated that Clint would happily tell you to get off his lawn.

Harry Callahan made being a loose cannon of a cop cool. The way he walked around with his shades on, telling people to make his day before blowing a hole in their chest will always hold a place in the hall of greatness. Say what you will about the sequels, but as a persona, Dirty Harry embodied the American bad-ass for over a decade. Personally, I hold the Dollars trilogy in the same high regard, but as a whole I'm guessing Harry Callahan holds a bigger place in peoples' hearts. Regardless, the films are classics, and nobody will tell you any different.

Raiders of the Lost Ark


Indiana Jones was my hero for a long time, and he still is. Harrison Ford oozed charisma every time he moved or spoke, and he almost made me take up archaeology. If, in reality, that profession was the same as an Indiana Jones movie, there would be a lot more archaeologists, and the world would be a lot more awesome. By day he would fight the Nazis and take all their shit, and at night he would bed the women I lusted after. Yes, I wished I was Indy, but who wouldn't? They jumped the shark with the Kingdom of the Crystal Skull, but I blame that on the good ol' Lucas Curse, and not the character becoming stale. Seriously, fuck George Lucas. But that's a tale for another day. Right now, I simply can't tell you how much of an influence Harrison Ford had on every other high adventure film to be made after 1981.


John Rambo was a loner, a survivor, and a distraught human being. I greatly sympathized with him as the po-dunk police parade tried to shit on his homecoming party. However, that was alleviated when he drove spikes through the knees of one of those assholes. He had it coming. Of the movies I've mentioned so far, this is by far the most serious. But it handles itself with class, and still holds up as one of the greatest action movies ever made. I really wish Stallone would have made more out of his career with more than just Rambo and Rocky, but as of late he's redeeming himself with damn fine resurgences of both franchises. Not much else to say about Rambo, except that I wear a bandana to sleep every night.

Much more could be said of Arnold Schwarzenegger's career, but to me, his defining moments are still encapsulated in the T-800 model terminator. In the original movie, he was the stuff of nightmares. His glowing red eyes would haunt my dreams for years, and I thanked God I was not the mother of the leader of the resistance meant to combat a robot apocalypse. In the sequel, he was the greatest ally you will ever know, as long as you gave him your clothes, your boots and your motorcycle. His strength and loyalty would never be broken, and the human race always stood a chance as long as he was around. Many would try to duplicate his on-screen badassery, including the third Terminator movie, but they all ultimately fail, and bow down to the greatness that is James Cameron's vision of our possible future.

There are more to speak of, for sure, but I think I've made my case for the American Icon thus far. People will be quoting lines from these movies until the end of time, and I'll take this opportunity to pride myself in being born in the country where these epic tales originated. That's all I have, and I can think of nothing more apropos than to end with the truth: I'll be back.