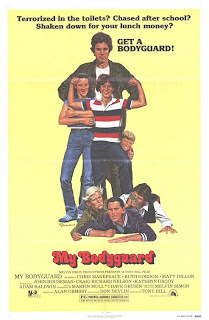 Call it a right of passage...at some point in a kid's life..they will inevitably deal with the school yard bully. It can be one of the most terrible times during youthful years...if you tell a teacher...you get beat worse...if you tell your parents...they tell the teacher...you get beat worse...! Thou shalt not tell on thy fellow peer is the LAW of the playground and cannot be broken lest ye be labled with the dreaded monicker of tatty-tale! More often than not...a kid has to deal with sleepless nights and that ever looming Monday morning smackdown that is just the beginning of another long week in the trenches. But, there will come a time when a kid has to make a choice.....they can sit there and take it...or do something about it...one of those decisions will shape their personalities forever and echo into adulthood. I made that choice once years ago..I'm sure my kids will too one day. This is a film about the choice made by Clifford Peache.


Clifford is the new kid in town and comes from a privileged background. His father is the manager of a posh Hotel in downtown Chicago and they live a good life. Cliffy has a great relationship with his family..especially his eccentric grandmother played by the late great Ruth Gordon. He's not an asshole rich kid, but rather just a nice guy trying to fit in and make friends at his new high school.


All goes well on his first day until he crosses paths with Melvin Moody (a young Matt Dillon) and his gang of loyal cronies. Moody is king shit of the school and everyone knows that to walk the halls unscathed...you pay him protection money. Protection from what exactly? From Moody of course, but he tells everyone that he is protecting their asses from Ricky Linderman (Firefly's Adam Baldwin) an oversized teen who roams the school alone and possibly carries a murderous chip on his shoulder. What is poor Cliffy to do...? Pay Moody extortion...or risk meeting Linderman in a dark alley somewhere? The choice is brilliant.


Cliffy knows that the whole school..including Moody...is mortified of Linderman. Instead of paying moody...he decides to befriend Linderman and offer to pay him to be his bodyguard. The only problem with this plan is that Ricky doesn't want any friends..nor does he want to be someone's bodyguard. Cliffy warms him over though his sheer will and perserverance...and they strike up a great friendship as well as striking back at Moody's gang. The twist comes when Moody decides to retaliate and get his own bodyguard to go after Linderman!! Now what?!!!
This sets up an epic showdown of Rocky-esque proportions that will have you cheering in the end.


All in all this is a great family film from the 80's. It's an underdog's tale...and it's hard to not root for Cliffy and Ricky as they team up and triumph over adversity. It's a film about family...friends...and that time in a person's life when it's OK to choose to fight. Oh yeah..what choice did I make?.....I beat the shit out of my school yard bully with a wooden stick..and do I feel bad about it..?...Not a damn bit!
Posted by MarkusWelby1 at 11:40 AM