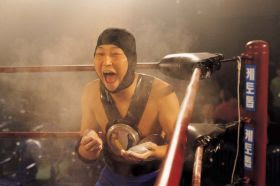 Wrestling. It's not high-minded, folks. Kim Ji-woon, the director of practically everything awesome to come out of South Korea in the last ten years, knows this. He didn't set out to create a genre masterpiece showcasing the incredible athleticism of professional wrestlers. Instead, he wanted to show how one man, through sheer determination and will, could wear tights in a public place and grope grown men in intimate embraces for the love of the sport.


Dae-Ho(Song Kang-ho) is pretty much a big fucking loser. He works some shitty office job that he's always late for, he lives with his dad, and he's generally just not a good people person. After we watch him get kicked around by everyone for a while, he stumbles across a crap hole of a wrestling gym. Inside the gym looks to be a crap hole of a wrestling coach, who promptly boots him out. The coach doesn't like him, but afterward he's told by some shady characters that they need a wrestler, and all of a sudden Dae-Ho becomes part of their wrestling team or whatever.

They all suck at wrestling if you ask me, but I guess there aren't too many people in Korea willing to drive around the country getting the shit kicked out of them. It's minor league, so I'll give them a break. Dae-Ho travels around with them doing show after show, and he thinks everything is great. He wrestles at night, and in the morning continues to suck ass at his job. But he's so focused on wrestling he doesn't seem to care anymore. So everything is great, I guess, except that all the shows are leading up to one super giant fuck awesome show where Dae-Ho is supposed to lose. I understand wrestling is fake, and the outcomes are all staged, thank you. But the way his character was pitched to him, Dae-Ho should win by cheating. I don't care how big a name the dude he's supposed to eventually fight is -- if you cheat in wrestling, you win. I mean just look at the refs, they're usually too busy humping the floor to notice whole teams of wrestlers entering the ring to pound each other in the balls.


Anyways, we're treated to a lot of Dae-Ho and his comrades in non-buff arms practicing and rehearsing their moves. His progression as a wrestler is quite evident, even though I think he was better than the rest of the group to begin with. Except for when he almost murdered a man with a fork. That could have been handled better. Besides that, though, you almost think he could win. You get the feeling it's not supposed to happen, but hey, you're watching a Korean wrestling movie so what the fuck do you know?


I can tell you that Song Kang-ho knows more than you, for one. In fact, he does all his own stunts. Every single one, and they're all awesome. For example, there's a great scene where he's impersonating Elvis and he does a back flip off the top buckle then kicks a guy in the chest. 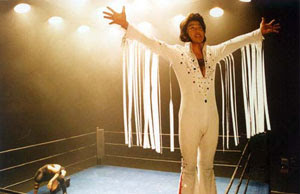 That's probably the best bit of stunt work he does until the end, but I still think it's cool that he does it all himself.

Early on in the film, Dae-Ho gets chased down and beat to hell by some local pussy gang. You know they're a pussy gang because once Dae-Ho learns a few wrestling moves, he swiftly puts them all in an arm lock and makes them eat shit. Not literally, unfortunately, but still a lot of the movie is about Dae-Ho improving his life, and repaying those fuckers that broke his cell phone is one way he goes about it. As he gets into better and better shape, he's able to confront some other demons that haunt him on a regular basis, but I'll save those for when you watch the film. It's great, trust me.


As far as his opposition goes, you never even catch a glimpse of him until the end, and he's only casually mentioned throughout the entire film. You know his name is Yu Bee-ho, but that's about it. It's not like Rocky, where there is a clear antagonist to hate. In The Foul King, Dae-Ho's greatest enemy is himself. Maybe that's to fool you into thinking that Yu Bee-ho is just some pansy that Dae-Ho could wipe the floor with. Maybe not. Maybe Dae-Ho becomes the greatest Korean wrestler in the history of Korean wrestling. Maybe not. The end of the movie is quite lengthy(in a good way) but I won't say one word about it.

He does get pissed at this point.


The greatest thing about this film is not the wrestling. It's a film about slightly dysfunctional people that happens to have some bad ass wrestling thrown in for good measure. Every time something genuinely cool happens, it takes you by suprise because most of the time the people on display here are quite inept. And I mean inept in the Homer Simpson way, so it's endearing. Once you've spent any amount of time with these characters, you want to see them succeed. Or, if nothing else, you just want to see what the fuck Yu Bee-ho looks like. Either way, the point is for you to watch this film, so if you watch only one South Korean wrestling movie this whole year, make sure it's this one.