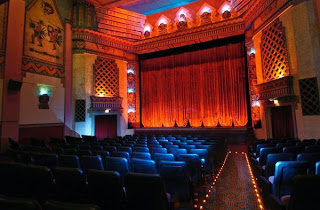 I always hear about how "The Alamo Drafthouse" in Austin Texas is the greatest place to see a movie in the world. It has a rabid fanbase that caters to almost everything a film-geek could ever want. Admittedly I'm a little jealous, but we've got something pretty awesome here in the rockies for the celluloid faithful. "The Mayan"!

Located in central Denver, "The Mayan" boasts the finest offerings in independent film. It's not the most comfortable way to see a movie. The local mega-plex offers ample parking and those big comfy stadium chairs, but there is a certain magic that happens once you fight the traffic and make the effort a trip to "The Mayan" requires. The lights go dark and you realize you are about to watch an unusual film in a theater full of like minded film buffs. Bliss!

Originally built in the 1930's, it has one main auditorium sporting the Art Deco Mayan Revival art style it was named after and two smaller theaters on the second floor. You can enjoy an adult beverage in the cafe, or go visit one of the many neighboring bars and restaurants afterwards. The entire street it's located on is chock full of interesting vintage clothing stores and art galleries to get your culture on. "The Mayan" also has something "The Drafthouse" does not....it has remained in the original building since opening decades ago which only adds to the cool factor. Suddenly I realize...I'm not so jealous anymore!