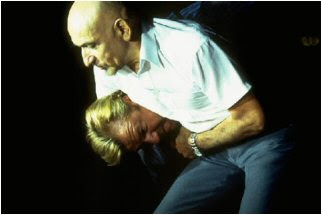 As much as Don Logan would like this movie to be about him, it isn’t. Throughout his persistent buggering, it’s about the frustration of a man who just wants to be left in peace. The writers of this movie crafted a script so full of venom that it’s initially hard to sympathize with anyone involved. But after the shock wears off, you quickly gravitate towards Gary Dove (Ray Winstone), a “retired” thief who’s had enough of the game and lives a secluded life with his wife, Deedee, in their palatial digs somewhere out in the countryside. Life is great until one day, Don Logan appears like a bull in a china shop and fucks it all up. I’ll get to his character in a bit, but his only goal from the get-go is to convince Gary to pull off one more job. Gary says no, and the rest of the movie is about how his life is made a living hell from the constant vitriol spewed by Don in order to get him to cave and go with him.


There’s not a lot of setup -- be it characters, motivations, or anything of that sort. Gary just wants Don Logan (Ben Kingsley) to get the hell out of his life as quick as possible. But that won’t happen unless he agrees to do the job, which involves drilling a hole underneath some place to steal something. What it is, I have no idea. Sexy Beast is not a heist movie, and it doesn’t bother with any details concerning what they’re after. It’s all about the pressure thrust upon Gary to actually do it, and how he handles himself after he declines the offer. I was expecting to write a much longer review, but that’s pretty much everything this movie is about. The only thing I haven’t talked about at length is Don Logan himself. He deserves a novel dedicated to his character, but it looks like he’ll only get a paragraph or two.


Don Logan is a heist man. What kind, we’ll never gather from the film. All we know is that he’s part of the plan, and for the plan to work Gary needs to be in on it. He flies in to visit him and get him to commit to the project. Don is an incessant asshole who doesn’t take bad news very well. Gary’s refusal sends him into fits of rage, and he’s a truly scary person when he’s pissed. I don’t know if I’d be able to say no to anything he asked of me. But Gary does, and it doesn’t sit well. I wish there was more to say, but that’s really all the movie goes into. There’s only a few locations seen, and most of it takes place in Gary’s home while Don berates him over and over. Speaking of Gary, Ray Winstone turns a character that could easily have been played with little effort into the heart of the movie. I really felt for the guy, and I wanted Don to get the fuck out just as much as he did. For fans of the HBO series Deadwood, Ian McShane makes an appearance in the film, and while he's not a huge part of the story, his scenes are great and he turns in a performace of the calibur you'd expect from him.

Ben Kingsley gives one of those performances that really makes me wish he would do more serious acting. Lately, he’s been in a lot of shit movies, and it’s really sad to watch his career unfold in the manner it has. Bloodrayne? Really? He couldn’t have been paid that much for phoning it in from the airport on the way to the set. I will say that it hasn’t all been horrible of late, though. You Kill Me and Transsiberian are both worthy films that almost allow him to wash the stain of Uwe Boll from his resume. Almost. Once you’ve been in one of his films, it’s pretty much going to haunt you until you die or have radical facial surgery and change your name. Regardless, Don Logan is a character that will endure the test of time and come back twenty years from now to spit in the face of whoever decides to watch him. Nothing I could say would do justice to his douche bagginess, so I’ll end with just a taste of what’s in store when you watch this movie.