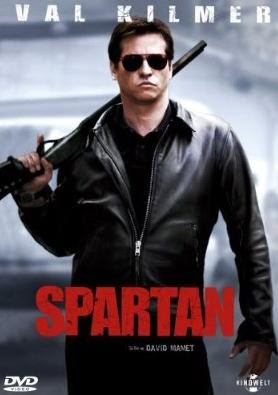 I figured I'd keep the action ball rolling, so here I am with Spartan, a 2004 feature directed by David Mamet and starring Val Kilmer. Kilmer plays an operative tasked with finding the President's daughter, who's been kidnapped by traffickers. Believe me, I know how this sounds - like a Van Damme movie or something, right? Ah, but this is David Mamet we're talking about, so c'mon, you know the film is going to have a lot going for it. It's not a mindless dude film with loads of retarded action and paper-thin plot. Again, this is Mamet. The characters are great, and I can tell you with some certainty that you won't believe some of the shit that happens here. I'll just say that Mamet isn't afraid to buck some archetypes in favor of making a more believable and grounded story. 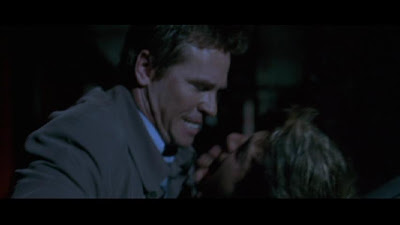 Spartan shares some similarities with the last film I talked about, Taken. They both deal with kidnappings, and they each have a sole hero taking on a bunch of bad guys. They're also similarly smart about the way they tell the story; all the events are shown through the hero's eyes, and the audience is left to wonder what's happening to the girl in distress. Is she alright? Is she bleeding from a gaping hole in her head? The heroes don't know, and neither do we. But the similarities between the two films end there. Where Taken is a more intimate story about a father and daughter, Spartan is more concerned with international affairs. Kilmer's operative is but a pawn in a larger game, and the simple task of finding and retrieving the target is harder than he first thought. Eventually, he finds that he has to go outside the rank and file of his command structure to actually do some good, so he enlists the aid of certain for-hire people and friends in low places.


Kilmer really shines here, and his character, Scott, isn't the typical loose-cannon agent that is usually required to push like movies forward. Instead, he's used to the structure of his agency, and it's only when that agency totally fails him that he feels the need to go it alone. It's more realistic than you're probably used to. He's not Superman, and he can't dodge bullets. He moves quietly and with precision. He only does what's necessary, and sometimes that means there won't be a mansion full of evildoers' carcasses stacked in a corner. But what Spartan may lack in total body count, it fully makes up for with an intelligent script and a logical string of events that would satisfy anyone looking for more from their entertainment than just guns and explosions. Some heinous shit happens that probably wouldn't fly in a more high profile action movie, and it has to do with characters, not over-the-top violence. 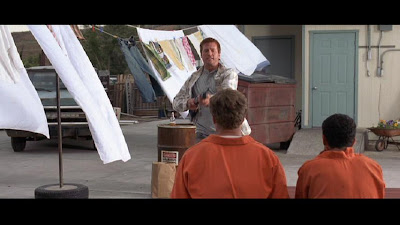 I think this film was severely overlooked, and even I wasn't really aware of it until recently. But that's just how it goes with stuff like this. If you were to ask a random person at a theater who David Mamet is, they'd probably have no idea. His films generally aren't the ones that get the water cooler talk going, if you know what I mean. I think you do. And I also think, since we're all on the same wave-length here, that you'll do the right thing and check Spartan out. It's worthy of your time, for a couple of reasons. For starters, it goes against the grain in a lot of respects, and keeps you fully engrossed by changing things up a bit. Also, it's great to see Val Kilmer again. He hasn't done much of note since Kiss Kiss Bang Bang, and even though this came before Shane Black's film, I still miss him in these kinds of roles. Give Spartan a go, you won't regret it.