The evil that mice do! Review-Watcher in the Woods (1980) 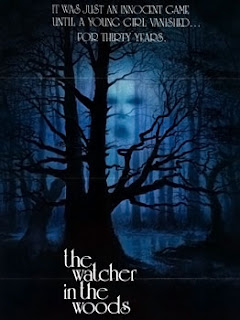 Aaah....potential! This one had it in spades. After years of doing nothing but family friendly fare, Disney decided to grow a pair and venture into darker territory. The 80's saw Mouse & Company churning out more adult oriented stories like "The Black Hole" and "Something Wicked this Way Comes" with varying degrees of success. "The Watcher in the Woods" was one of their first attempts to rise above the cartoon crowd. They had high hopes for it, and one executive was even quoted as saying "this could be our Exorcist!" That was probably setting the bar a little too high, and even though "Watcher" didn't soar to great box office heights, it has become somewhat of a beloved cult film since its release almost three decades ago. It's a ghost story with a sci-fi twist that entertains, but doesn't quite deliver the goods in the end. (of which there are many)
Directed by John Hough, (Legend of Hell House) "Watcher" is the story of Jan Curtis (Lynn Holly Johnson) a teenage girl who has just moved to the English countryside with her family. They rent an old house in the woods from Mrs. Aylwood (the legendary Bette Davis) and settle in. Jan soon learns about a mystery concerning Mrs. Aylwood's daughter Karen and becomes obsessed. It seems that thirty years earlier, Karen and three of her friends were in an old church in the forest performing a seance during a solar eclipse. A bolt of lighting hits the building and her companions flee, and when they return, Karen is no longer there. Did she run away or simply vanish into thin air? Nobody knows for sure, but Jan sees ghostly images of Karen pleading for help in mirrors and window panes. Strange things are definately afoot, and even Jan's sister Ellie is acting a little weird claiming that a voice told her to name her new puppy Nerak. (just spell that backwards) Jan also feels like someone.....or something is watching her family from the dark woods. Is it the ghost of Karen or something even more sinister? Only Jan can unravel the details and discover the truth, and she must do so before the next solar eclipse which happens to be soon!

Now she truly has Bette Davis eyes!
This movie used to freak me out a little bit when I was younger, and I'm happy to say that after re-watching the "Watcher," it still holds up to a certain degree. I was fascinated to learn that this film had been cut to shreds by the time it got a theatrical release. There were several different endings, and an opening credit sequence that was cut because it was deemed too dark for Disney which doesn't really make sense because they were actively searching for this type of material.
Legend has it that Disney desperately wanted this film to coincide with Bette Davis's 50th anniversary in film so an elaborate F/X sequence that revealed the watcher and brought the plot to conclusion was shot, but not finished so they could release it in time. The first attempt to screen the movie showed a little of the original ending, but the studio hated it and it was re-shot without John Hough. The new ending is what most fans of the picture are familiar with. All fans of "The Watcher in the Woods" could hope for is that someday a director's cut would be released with the true vision of the film intact. We almost got our prayers answered.......almost. 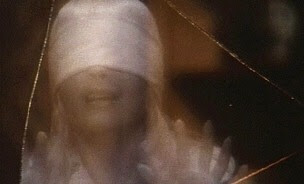 the image of Karen Aylwood in the mirror
Anchor Bay is one of my favorite DVD companies and they usually release their titles with much love and attention. (Dirty Mary & Crazy Larry....Evil Dead II) Most of the time you can bank on having a classic flick loaded up on DVD with crazy extras and commentaries that hardcore enthusiasts demand, but unfortunately Anchor Bay had to work with Disney on this release. They originally planned to have John Hough assemble his director's cut and also have the theatrical cut available across a two disc set, but Disney would not cooperate to make this happen. They claimed they couldn't find the footage in the vaults, and I also have a feeling that they didn't want to be associated with this dark material anymore. What you do get IS a worthy attempt to bring some of that original gloominess to the table. There is commentary by John Hough, as well as a twenty page booklet of interviews with the original cast. The original ending is there and you can watch it seperately in all of its unfinished glory, although I actually prefer the theatrical one after seeing it. Disney countered with their own DVD release minus the commentaries....so basically it sucks. If you wish to track it down I recommend the Anchor Bay disc which has strangely vanished out of print just like Karen! 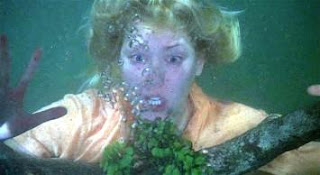 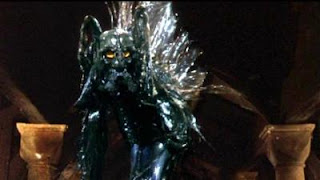 It's truly a shame that Disney will go after unique material only to see it butchered up to fit the the image they are comfortable with. Why bother at all in the first place? Either you want something outside the box or you don't.....it should be just that simple! I guess I'll never understand the politics and red tape involved with producing a studio picture, but come on Mickey!..... Take your pooper scooper to the back yard and clean up all those direct to DVD dog turd sequels you've been laying and leave the supernatural stuff to the people who really want something different! 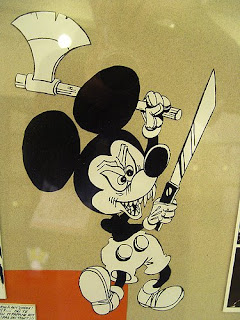