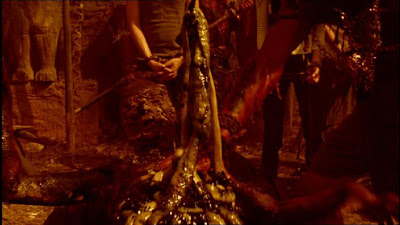 While I haven’t seen many movies that deal with the physical place of hell itself – and I haven’t had the pleasure of going, either – I’d imagine it’s a lot harder to get out of there than Hell makes it seem. Sure, there’s a lot of gnashing of teeth (and pulling them out), liquid lava down the gullet and the like, but really, all you have to do is punch a few people and keep running. At least that’s how some of the characters in this movie did it. As an aside, the torture masters in hell really make a shitty sailor’s knot, too. 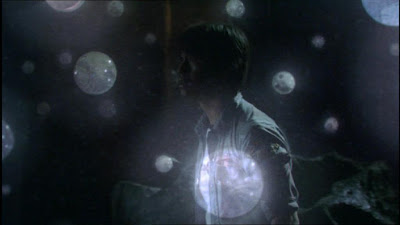 
The story starts off with a group of people getting ready to go on some kind of journalistic endeavor. They’re introduced one at a time, and some of them are pretty good people. Some (one, really) are dicks, and as I’ve mentioned previously, we all know what happens to dicks. Anyways, after the character build-up is out of the way, they all get in the van and take off for wherever. Their trip is shorter than expected, though, when they get into an auto accident and find themselves instantly transported to the land of lollipops and rainbows. Razor lollipops and flaming rainbows, but what’s the difference, really? Right from the beginning, there was something familiar about this place. I couldn’t quite put my finger on it for a while, but then it suddenly dawned on me. It’s the fucking Outworld from Mortal Kombat. Not that the filmmakers ripped it off or anything, but man, I was waiting for Shao Kahn to fly down and impale someone at any moment. 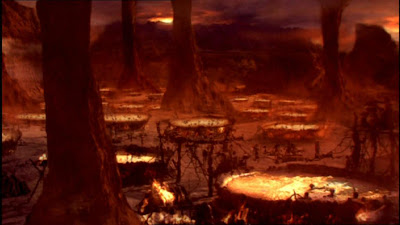 
Alas, there’s no Goro showdown, but the fresh captives do find themselves battling hell’s soldiers (who look like a cross between the flying monkeys from Wizard of Oz and extras from Battlefield Earth), flesh-eating children, deceptive sirens, and a lot of walking. I mean, some fucked up shit does happen to them, but as they wander about, it seems that everyone else in hell is hopelessly incapable of escape. Also, the main characters are apparently the only new residents of the netherworld, because all the other tortured souls look a bit worse for wear. I’d surmise that’s to be expected, really. If only they’d known to just run away, but oh well…sucks to be them. And it really does suck to be anyone around the dick I talked about in my second paragraph. This guy is self-serving at best, and downright loathsome the rest of the time. He even dooms a friend to the fate of being ripped to shreds by the aforementioned flesh-eating children. So fuck him. I waited patiently for him to slip up, and boy did he ever. I’ll leave you to ponder his fate, but it’s pretty worthy of his douchiness. I liked everyone else, though. They weren’t all one-dimensional characters; they each had their faults, but they all possessed some redeeming qualities. It’s too bad I never really figured out exactly why they all ended up in hell, then. Huh. Why not, I guess. 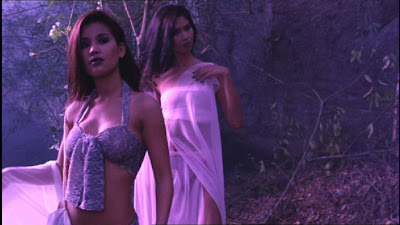 No, really...go ahead. Do them both. They won't eat your face or anything.

Besides the familiar motif, I also think hell isn’t a place that you can just wander around until you find the magical portal back to earth. I would guess that once you’re there, you’re fucked. Unless, of course, you were sent there for no apparent reason, and you jump back into the blue spirally vortex of rebirth. 90% of the time, that does the trick every time. The overlord of hell doesn’t seem to do much about that seemingly glaring design flaw except speak in Sanskrit and sit on his fat ass, which is a good thing for everyone involved in the movie. You see, the way death and rebirth works is this: you stand in line next to the vortex of rebirth, take a number and wait. Probably for a fucking long time. When it’s your turn, you eat a little black ball and drink some shit, which allows you to be reincarnated and forget all your past memories, respectively. Nice. Or, as the journalistic endeavourers did, simply run and jump in. No one ever said you had to have a PhD to run hell.

I’m not really being overly critical of the movie. In fact, I enjoyed it quite a bit. The premise is just a tad silly (but still done in a cool way), and while there are definitely gruesome acts being done, the movie never dwells on them. You really only see the tortures briefly when compared to the length of the movie, which clocks in at 124 minutes. It’s not a bad thing, necessarily, since you get the picture pretty quickly, and yea…hell is a sucky place to be. It’s a cool movie, though, and while it didn’t set my world on fire (ha), I’d recommend it to anyone who likes horror and/or interesting concepts. I have to say they did a damn good job with the trailer, which I have below. It’s pretty kick ass.