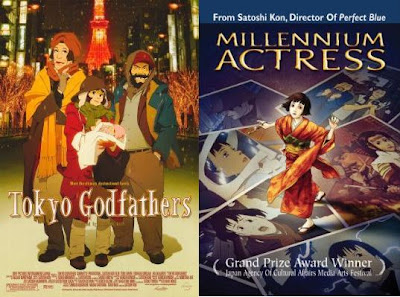 In this, round 2 of my Satoshi Kon retrospective, I’ll be talking about two more of his feature films: Tokyo Godfathers and Millennium Actress. They’re both vastly different from the films I talked about in Round 1, but the overall quality and care is as present as ever. So enough with my blabbing, and let’s get on to the films themselves. 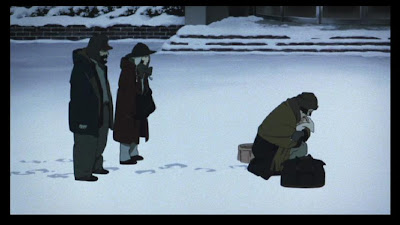 Tokyo Godfathers is thematically much more straightforward than either of the previous films I talked about, Paprika and Perfect Blue. Where both Paprika and Perfect Blue dealt with altered perceptions of reality, this time Satoshi Kon went for a more traditional tale in the way the story unfolds. Hana, Gin and Miyuki are three homeless people who start the film off scrounging around for food and whatever else they can find in a trash heap. Besides an assortment of old books and the like, they stumble upon an abandoned baby in a basket. Hana decides to raise the baby herself, much to the protests of Gin and Miyuki. After all, how could some homeless people, who can barely take care of themselves, raise a baby? That’s a good question, and one that she ponders until she comes to her senses and starts to track down the parents of the unwanted infant. The three set off on their journey with barely a clue, and little chance of finding the baby’s maternal parents. Along the way, we gradually find out how each of them came to be in the position life has put them in, and it’s in these discoveries that Tokyo Godfathers really shines.

I really cared for Hana, Gin and Miyuki, and once again found myself lauding Satoshi Kon as a director capable of telling stories that rival that of any live action film. There’s no melodrama; in fact, the story is rather simple. But within the confines of the plot are three separate, but very moving accounts of how a person’s life can be rendered useless, only to be redeemed by a chance occurrence and, possibly, some kind of divine intervention. The emotional investment here is really high, and it’s a rare thing to occur in an animated movie, at least for me. Often times, action or visuals make up the most important bits of anime, but with Tokyo Godfathers, the characters are the most important part of the film. It’s heartwarming, funny and sad all at once, and pretty much a perfect blend of every kind of emotion one could hope to experience in a drama. You’ll have to excuse the narrator in the trailer below – he kind of sucks, but what can you do. Just forget he’s there and it’ll do just fine. 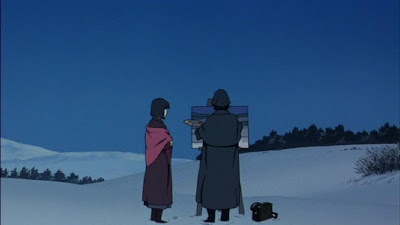 Like Tokyo Godfathers, Millennium Actress is a dramatic character piece. The story is about a film crew that goes to interview Chiyoko, a retired actress who, in her later years, has lived in seclusion in her mountain home, seldomly entertaining any visitors. What starts as just an interview turns into a deep reflection on Chiyoko’s life, and how a single moment early on defined how she lived. The film shares a similar theme with Tokyo Godfathers, in that chance coincidences can have deeper meanings and make lasting impacts on peoples’ lives. The bulk of the film plays out as two parallel stories – that of the movies Chiyoko played in, and her actual life. The two narratives intertwine and play off of each other to create a single over-arching story, and Chiyoko’s life is shown to have been defined by something simple, yet immensely important from her past.

The main interviewer also has a part in Chiyoko’s past, and as she tells the story of her life, the film crew is seen actively taking part in her tale. They physically interact with Chiyoko in the past, and their interactions carry over into the present. Maybe they were just acting out her past during the interview, but whichever way you choose to interpret it, it’s a really unique and interesting way to give perspective to the story. Millennium Actress is an emotional film, and Chiyoko’s struggles and aspirations are always at the forefront of every situation. As is customary with every Satoshi Kon film, the animation is beautiful, and the locations are as much a part of the film as the story. I probably sound like a broken record at this point, but Kon really knows how to engage the viewer in every aspect of storytelling, and Millennium Actress is no exception. Devoting a lifetime to finding one person, no matter the obstacles, takes a kind of determination that is usually not realistically sustainable. The film explores that very theme, and the notion of chasing a shadow is shared by more than one person. Millennium Actress is a moving depiction of life’s pursuits, and how those pursuits dictate the person you ultimately become. Again, the trailer is below, with – of course – crappy American narration. Yippy.

Well, that about does it for my Satoshi Kon retrospective, and leaves me with only one more creation of his to explore. The serial anime Paranoia Agent is all that’s left for me to talk about, and I’ll get around to it eventually. It’s kind of hard to get a hold of, so I’m not sure when that will be. But if you want to get started watching his work, any one of his films will do the trick. I honestly can’t recommend one over another, as they’re all exceptional for vastly different reasons. Just pick one and go from there. And when you do, I hope you take away at least a fraction of what I did from the emotional journeys he lays out for you to experience.