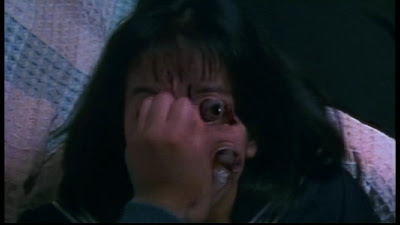 I previously reviewed Eko Eko Azarak: Wizard of Darkness, and decided to withhold final judgment until I watched all three films in the trilogy. Well, I watched them all, and here are my thoughts as promised. Since I’m reviewing two movies, I’ll truncate the length of my usual reviews so that you can actually make it to the end without falling asleep or going into a boredom induced coma. However, in order to get the whole picture, I strongly recommend checking out my review of the first film before reading any further. Or, you could skip all of this and go directly to the bottom for a nice little surprise. 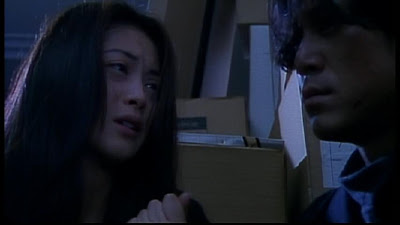 As it turns out, the sequel to Eko Eko Azarak: Wizard of Darkness is actually what I was hoping the first film would be. Birth of the Wizard is a prequel, and as such, it addresses most of the story related concerns I had with Wizard of Darkness. My main problem with Wizard of Darkness was the uselessness of Misa while her friends were being systematically killed in diabolical ways. She was supposed to know all sorts of things about magic, but when it came down to it, she either really sucked at it or just didn’t know what the hell she was doing. But since Birth of the Wizard is a prequel, the story deals with how Misa got tangled up in all this magic business in the first place. About a hundred years ago, there was a small village of magic users. One of the villagers named Kirie died somehow, and her husband used a forbidden spell to bring her back to life. If there’s anything I’ve learned in my many years of movie watching, it’s that bringing someone back from the dead is usually a really dumb idea. Sure, it works, but as an added effect, the person you bring back will probably also want to kill you and/or rip the face off of everyone they meet. And guess what? That’s exactly what happens here. After killing most of the villagers, Kirie goes into a hundred year sleep. While she’s gone, the remaining villagers decide that her husband needs to be around to stop her when she comes back to kill the heroine of the trilogy, Misa Kuroi. I guess since he’s a bona-fide wizard, he knows how to stay alive that long. The film doesn’t go into that, but hey, he's a wizard. I can deal with that.


Sadly, so far neither film has explained why Misa is so important, or why she’s the supposed ultimate magic user. Again, I can only hope the next film delves even further into her back story. As it stands, though, Birth of the Wizard is a much, much better film than Wizard of Darkness. It’s a lot more exciting; throughout the film, Misa and Kirie’s husband are stalked by the resurrected Kirie. The cool part is that Kirie can inhabit the bodies of anyone she chooses, so she’s seen as a police chief, a gynecology doctor (I think?), and, lastly, Misa’s best friend. Now that I think about it, this film has a lot in common with The Terminator. The story plays out almost identically, but with magic spells and resurrected demons instead of 12 gauge auto-loaders and robots from the future. I’m not saying Birth of the Wizard is anywhere near as good as The Terminator; I just think it’s interesting how many parallels the film draws to Arnold’s opus. The influence of James Cameron is far-reaching, indeed. Despite this being a fairly low budget film, the special effects are pretty nifty. They’re nothing that will leave your jaw dropped, but I thought they had a kind of trippy quality that low budget movies have when there are creative people working behind them. Every aspect of Birth of the Wizard is better than its predecessor, period. If you want to start watching the trilogy, you should really start with this one. But then again, you’ll be watching the first film afterwards, and that would be pretty disappointing. I guess it would be disappointing either way, though, so you might as well start off with the better film so as to keep your interest piqued. If nothing else, at least you can see a high school girl’s face get ripped clean off. Good times. 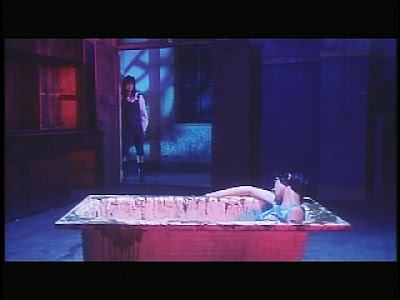 Once again, I was disappointed that I never found out how or why Misa came to possess her powers. It’s like they knew I was expecting it, so they purposefully left out the one thing I wanted most. You know, that’s probably not true, since Misa the Dark Angel sported a new director, Katsuhito Ueno, and it looks like that’s the only movie he’s ever done. I suppose one is better than none, and it might as well be the second best film in the Eko Eko Azarak trilogy. I say second best because I enjoyed Birth of the Wizard a lot more than this one and the first film, but there are still some things to like here. The story picks up at a seemingly random time in Misa’s life; she’s already been going around solving supernatural mysteries for a while, and this film sees her go to yet another high school where a bizarre death occurred. She joins the school’s drama club in hopes of getting closer to the people she thinks might be involved in some way. It’s a little slow to get going, but once it does, I was fairly entertained. There are creepy occult people, a sacrifice of 7 girls to be made, and a final confrontation between Misa and the dark forces at work. Sound familiar? That’s because it takes a lot of cues from Wizard of Darkness, only there’s a lot more interesting stuff going on. Yes, it’s still about a bunch of high schoolers trapped in a building together just trying to survive. The difference here is the much creepier atmosphere, and Misa actually kicks ass this time. The action scenes aren’t particularly well done, but at least she stabs and roundhouse kicks some occult worshippers. There are also some genuinely cool ideas being thrown around, though, such as the way all the girls meet their respective makers. The occult leader has to kill the girls in the meanest way possible for each person. For example, one of the girls is a neat freak, so she gets a lot of mud and green shit drenched all over her while she’s running down a corridor. Then, she opens a door and finds a bathtub full of nice, clean water. She gets in the tub and starts washing away all the dirt and grime, only to then find it full of disgusting slime. I think overall, more could have been done with the concept, but that one scene played out very well. There’s not much else to say about this one, though. It takes the general premise of the first film, and adds better atmosphere and a more mature Misa.

As a whole, I can’t really recommend this trilogy. I think you’d be best served by ignoring the first film and just watching Birth of the Wizard and Misa the Dark Angel. But if you only want to see the best this story has to offer, Birth of the Wizard is the way to go. An engaging plot (like I said, very Terminator-esque), likable characters and some good gore allow the film to stand head and shoulders above the other two offerings. The one thing these films lack is anything more than a very thin thread linking them all together. There’s no real continuation of the plot between any of them; they all seem to just take the general premise, and proceed to make shit up for each film. I just noticed that there are apparently, like, three or so more movies after these in the Eko Eko Azarak cannon, and even a TV series. I’m not going anywhere near those, and I’d advise you to do the same. I mean, once you get to the sixth film in any franchise, what redeeming qualities does it usually have? Exactly. And double yikes for the TV series.

If you didn’t notice, there are no trailers to accompany my two reviews. The reason for that is the one for Birth of the Wizard blew ass, and there simply wasn’t one on the Misa the Dark Angel DVD at all. But as it turns out, that curse was a blessing in disguise. While I won’t be showing you any more clips of Eko Eko Azarak, I do have three trailers that I couldn’t be more privileged to share with you. All three were on the Misa the Dark Angel DVD and, holy shit…just watch them. I’ll probably be reviewing each one at some point. You’ll see why.

These things seem to have been made with Powerpoint or some shit, and I wouldn't ask for anything more.

Tits, lots of samurai showdowns, some kind of human/catapillar-like metamorphosis, and the dude from Tetsuo: The Iron Man. Yes, please.

"In this park, I will have strange tropical animals. Bwuahahahahaha!!!"

"Killing will light up the true nature of the woman."
Fuckin' A, it will.


(I didn't really truncate anything, did I?)