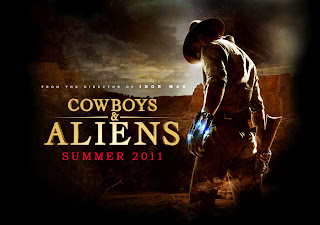 Hot off his first ever appearance at San Diego Comic-Con, Steven Spielberg has been spilling the goods about his latest and greatest creations that will be gracing movie screens near you. GPS was granted an exclusive audience with the academy award winner and was simply stunned when he revealed not one.......not two.....but three sequels currently shooting simultaneously for the upcoming "Cowboys & Aliens" franchise. Jon Favreau is back on board directing the next exciting chapters in the sci-fi saga about other worldly invaders, and he happily joined his mentor during our presentation. 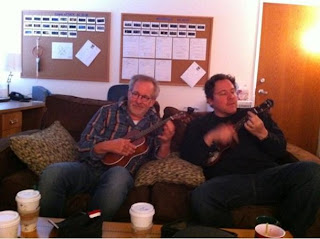 Spielberg & Favreau tuning up movie magic together
The two movie mavericks are extremely confident that the first film will be a smashing success which is why the studios have greenlit the sequels so quickly. Said Favreau about the massive follow up projects, "Everyone loves scary aliens......and Steven and I have come up with some amazing scenarios to pair them up with......just unbelievable stuff!" Spielberg showed GPS a few early photos of the productions, but warns that they are merely works in progress with unfinished F/X shots to be added later. "We're still playing around with some of this stuff.....it's raw........but we're very pleased to give you just a little taste to whet your appetite!" Without further ado, here is what we saw when the two geniuses pulled back the curtain. 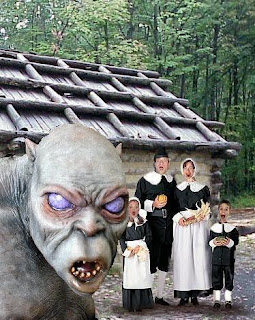 Pilgrims & Aliens
The pilgrims have landed on Plymouth Rock, but so have the aliens! Come Thanksgiving, Native Americans and the rest of humanity will quake at the prospect of getting booted off their land as well as their planet! Favreau insists that this is a match made in heaven. "The next chapter couldn't be cowboys again.....it had to be special......what's better than setting the story in the time of the Pilgrims......then releasing it on one of America's favorite holiday weekends?" This sounds like one Thanksgiving contest your overweight uncle won't be sleeping through after turkey dinner! 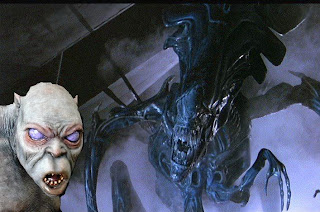 Aliens & Aliens
Our mouths were completely agape when we saw this still, but Spielberg explained his rationale to us about the second sequel. "Everyone knows James Cameron basically wants to be me," the mogul stated. "He's had a hard-on for my stuff his whole career and I'm going to take his greatest work and basically make it even greater than that hack ever could." Favreau was chomping at the bit to throw his two cents in. "It's going to rival his space marine opus by leaps and bounds......Aliens & Aliens.....think about that..it's brilliant....it simply cannot miss.....game over man!" 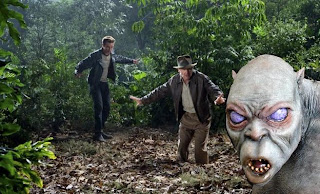 Indiana Jones & Even More Crystal-Skulled Aliens
Before we even had a chance to react to the final still, Spielberg quickly jumped from his seat and defended his concept to us for "Indiana Jones & Even More Crystal-Skulled Aliens."  "I believe there is a pretty rabid following for Indy IV out there........this ones for them!," he declared. "People want to know where the crystal skull came from and I'm not going to disappoint them!" The veteran director explained that the last installment of the "Aliens &" saga will be a potent combo alongside the very final adventure of the daredevil archeologist. "Indy is passing the torch to Mutt.......I'm passing it to Favreau....Harrison will probably be passing away in general........this is just a perfect ending that will kill two franchise birds with one stone!"
Big things are certainly in store for the "Aliens &" series, and hopefully this dynamic duo haven't gone overboard with these concepts.  Only the final box office receipts will say for sure, but GPS cannot wait to see what these directing titans have in store for audiences in the summers to come.