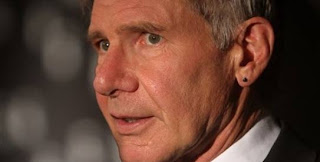 Upon hearing the news that George Lucas was digitally recasting the role of Han Solo made famous by Harrison Ford for the upcoming "Extra Extra Special Editions" of the original "Star Wars" trilogy, the 69 year old actor was not pleased. "He's a fucking idiot," said the grumpy Ford.  Asking what he thought about his replacement drew even more vitriol from the veteran thespian. "Twilight sucks and Pattinson is a no talent ass clown!" It's clear the cast of the original trilogy is not happy with their life's work being tampered with by the bearded one. GPS had the exclusive first look at the "Extra Extra Special Editions" right here http://bit.ly/qxLwZ7