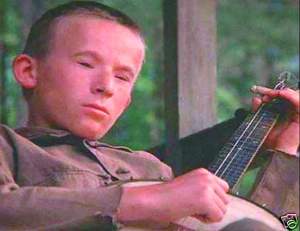 For Simon Cowell's new show "Georgia's Got Talent," it was 2009 all over again. When a local Cahulawassee River contestant stepped on the stage and started strumming his banjo, the former "American Idol" judge and his panel were absolutely stunned by the musical genius on display. The video clip of the performance was subsequently posted on Youtube and has garnered almost four million hits as of this writing. The kid from Georgia known only as Banjo Boy has gone viral, and the entire globe is simply delighted as they anticipate what he'll do for an encore in the next round of the contest.

Cowell admits that he didn't know what to expect when Banjo Boy initially took the stage. "Honestly......it seemed like there may have been some inbreeding with this kid and I thought my God those stereotypes about the south are true," the jaded Judge explained. "But when he started picking those Banjo strings.........wow....I haven't been moved like that since Susan Boyle sang I dreamed a dream from Les Miserable  in 09!"

Cowell moved by Banjo Boy's picking
Two men on a canoe trip down the Cahulawassee river were also able to witness the melodious display at the outdoor venue where the show was taking place. For Atlanta businessmen Lewis Medlock and Bobby Trippe, Banjo Boy was the highlight of their mostly trouble filled vacation. "I killed a couple of rednecks with my bow and arrow......so I'd been in a pretty bad mood," said Medlock. "When I heard this kid playing......hell....even my armor of manliness had to be stripped away a bit." Trippe was more open about how moving the music was to him. "I couldn't help myself.........I just felt compelled to get on all fours and squeal like a piggy." 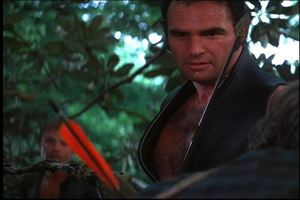 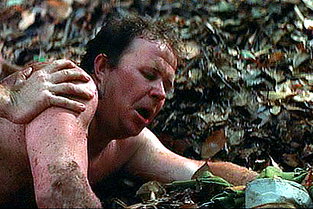 Trippe squealing with delight
Will a contest victory be a southern slam dunk for Banjo Boy? Nothing is guaranteed, but at least he's made it to the next round and gained legions of fans from around the world in the process. Good Luck Banjo! The sensational clip of the audition can be seen below.