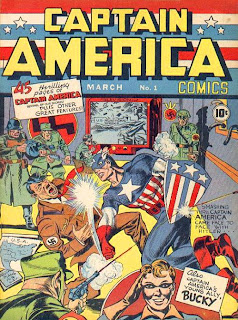 It was pandemonium at the San diego Comic-Con as two cosplay titans duked it out for geek supremacy. Phil Cornbottom AKA Captain America took offense when a fellow cosplayer showed up at the popular convention dressed as Hitler. The security team at the convention center immediately stepped in to halt the melee and escort them off the grounds, but were so moved by Captain America's patriotic stand against the Third Reich, they decided to let the combatants settle it mano-a-mano.

When Cornbottom saw Ed Thortencallow in the garb of the infamous German Chancellor, his blood began to boil. "There's an unspoken code to cosplay," Cap explained angrily. "You dress as the Joker, you dress as Catwoman......cosplayers absolutely do not embody evil historical figures.........he crossed the line man!" Thortencallow was actually shocked when blindsided by the star spangled avenger. "My Osama-Bin-Laden costume was the hit of the show at Nerd-Con 08," the fascist dictator elucidated. "I was just trying to up my game here in San Diego......besides...there's already a hundred Red Skulls here...but no Hitler." 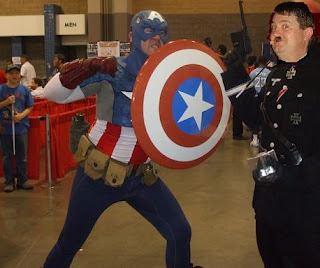 Cornbottom giving Hitler a patriotic punch in the noggin 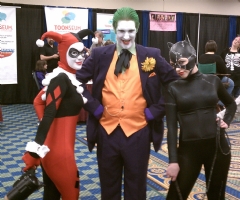 more socially acceptable cosplay villainy
The dueling dorks were banned from attending the rest of the four day show, but Cornbottom feels it was worth it. "I did it for my fellow cosplayers as well as my fellow Americans," Phil stated proudly. As for Thortencallow, hopefully he'll more carefully consider his wardrobe at the next con.