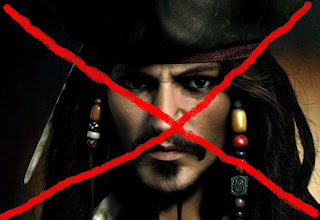 For those of you who can't wait to see what shenanigans Johnny Depp's Captain Jack Sparrow will get into next, well...too bad. GPS is reporting exclusively on the newest installment of the mega-franchise, which will see a major re-tooling of its principle cast.

Citing scheduling conflicts and the fact that he "doesn't give a shit" anymore, Johnny Depp is out as Pirates' leading man. GPS got a hold of Jerry Bruckheimer, and we asked him what that bombshell means for the film going forward. "Well," he said, "We've decided to go in a different direction. Everyone knows and loves the Captain Jack of old, but wouldn't it be neat to turn everything on its head and make it so everyone hates his guts? I thought it would be, at least. So now he's the bad guy. Suck on that."

Through sources who wished to remain anonymous, GPS also found out who Depp's replacement will be. Rupert Everett is currently in "deep, meaningful talks" with the producers to take over where Captain Jack left off.

We were able to get our hands on a pic from Everett's first screen test.
Just in case you weren't weirded out enough by all of this, it also appears that the production will be turned into a musical. According to the same unnamed sources, the inspiration for the character change came from the 2000 production of Peter Pan, with Paul Schoeffler's Captain Hook being the driving force behind it all.


Every pirate should know how to tango.
We'll keep you informed as the story develops further.
Posted by Sir Phobos at 6:42 PM