They say artists are their own worst critics. Never satisfied to rest on his laurels, George Lucas is planning on re-releasing the original Star Wars trilogy with digitally recast younger hipper actors in an attempt to better connect with today's movie going audience. We at GPS are extremely excited to give fans an exclusive first look at what the Jedi Master has planned for our beloved sci-fi series.

After being herded into a special screening room at Skywalker Ranch, GPS was treated to a brief montage of clips from what Lucas has dubbed the "Extra Extra Special Editions" followed by a Q&A session with the bearded one. What we witnessed was nothing short of amazing, and we were extremely enthused to have George tell us a little more about the digital recasting process. "Looking back on it......the original cast really bothers me and I'm just not satisfied with it anymore," Lucas declared. "I thought this would be a great chance to go back and fix what's wrong with it." 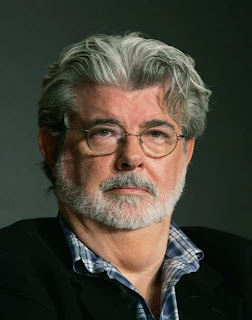 Lucas not satisfied with original cast anymore
During our conversation with George, we learned a little more about his casting motives for the new actors embodying our favorite characters. First up was Luke Skywalker. "I really felt that Taylor Lautner would make a perfect Luke.......he's young......ripped....and the girls just loved him in Twilight. Besides, I always thought Mark Hamill was kind of fugly." We couldn't resist asking if we would get a chance to see Lautner remove his shirt at some point in the new editions. "Of course," George emphatically stated. "When he's Jedi training on Dagobah during Empire Strikes Back you're gonna get to see that kickin six pack!" 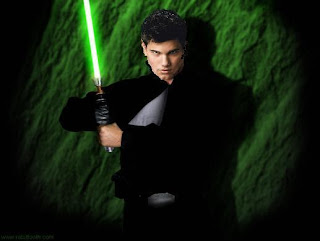 Luke SkyLautner....with shirt set to ON mode
We were a little dubious about seeing the next choice, but Lucas proceeded to explain why it was necessary to recast Harrison Ford's version of Han Solo. "Harrison's work always kind of rubbed me the wrong way....I mean.....he had great presence in the original....took it to a whole new level in Empire......but kind of phoned it in during Jedi.....frankly I was pissed about that!" Lucas feels that Robert Pattinson is the perfect compliment to his new Luke. "Some things just work great together like peanut butter and chocolate.......Han and Luke.....Jacob and Edward....it just made perfect sense to cast another Twilight actor." 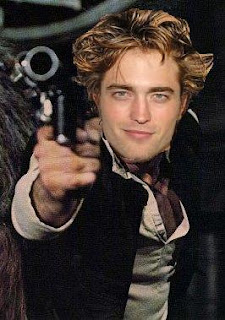 Han PattinSolo
What are Luke and Han without their princess? We were astonished to learn that the role of Leia went to the gorgeous Megan Fox. Lucas made it clear that he wanted some serious eye candy for the new role. "Leia is kind of a thankless part and she doesn't really do much anyways so that's perfect for our new girl," Lucas expounds. "Megan can't act a lick......but that's OK because she's going to look fucking hot in Jabba's slave girl outfit." 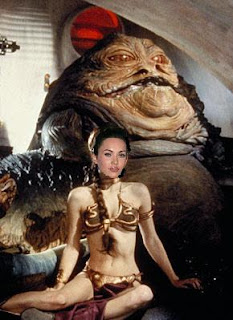 That's one foxy slave girl!
Lucas was completely hush hush about the new Darth Vader, but he did let us see his former mentor. "This is the one that pleases me the most," The director said with a smile. Jane Lynch as Obi-One-Kenobi had us scratching our heads a bit, but we didn't want to ruin George's excitement. "I'm a huge Glee fan....a Gleek if you will..... and to completely change what audiences expect from this character is going to be a blast." About his decision to recast the role previously played by an Oscar winner, Lucas had this to say, " Sir Alec Guiness had an Oscar.....Jane has an Emmy....what's the dif?.....besides.....O-Glee-One-Kenobi has a nice ring to it!," the director laughed. 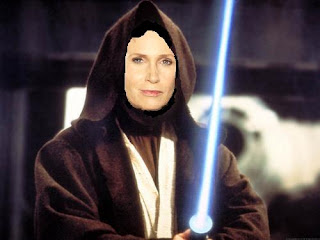 The Force is strong with O-Glee-One-Kenobi
There was no word on an official release date for the "Extra Extra Special Editions" because the digital recasting will take some time to perfect. We did ask him if the new releases would be compiled from the original original trilogy or the special editions loathed by many fans. "I actually don't remember what we've put in or taken out anymore," says Lucas. "The bottom line is that I own this shit and I'll do what I want with it......anyone who disagrees can suck this millionaire's big one." After that exchange, a clearly agitated Lucas had GPS escorted off the grounds by security. Will fans embrace these exciting new changes? Maybe, but just in case, we'll still have our VHS copies of the original trilogy handy for our viewing pleasure.