Rise of the Planet of the Apes: Trailer Impressions 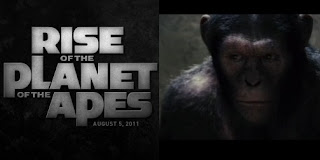 The first full fledged trailer is out for the next iteration of the "Planet of the Apes" franchise and the fans are buzzing with anticipation. I've watched the trailer several times now and just wanted to post some thoughts on my own personal reasons to be excited about where the filmmakers are going with the material. Hang on tight....it looks like we're in for one hell of a roller coaster ride folks!

First let's talk about what to make of the story. It's difficult to get a complete impression in two and a half minutes, but it seems like a political commentary on the ethics of animal research. There's a smart chimp named Virgil who was taught sign language and he gets incarcerated amongst a batch of other similar simian beings. Again, it's hard to tell, but the government is apparently conducting top secret experiments involving jet flying chimps. For what purpose we'll just have to wait and see. Teaching a chimp sign language then teaching it how to fly a jet can only spell disaster in my opinion, and clever watchers should know this will spell doom for our heroes. This seems like a completely original take and should steer the series into a thrilling new direction. Color me enthused.

Only simulation now, but we know how this ends!
Another reason to get your juices flowing about this is the CGI work done by motion capture legend Andy Serkis. He's carved out a nice little career playing the likes of Gollum in the "Lord of the Rings," but he's also completely fluent in primate motion as  we witnessed with Peter Jackson's "King Kong." (2005) It's my understanding that the apes in the movie will be completely computer generated and will likely be the most realistic ever seen on film. Going by the pedigree of Weta Digital, I'd say I have to agree with the assessment. 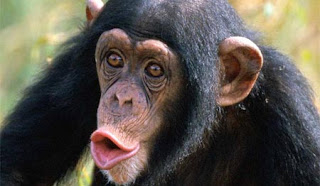 Truly impressive CGI of Virgil the chimp
George Lucas always maintains that special effects are just tools for telling a great story. He's right. The most amazing CGI in the world won't save a narrative not told by competent actors, and this is where the new "Apes" will really shine. The dynamic chemistry portrayed in the trailer by star duo Matthew Broderick and Helen Hunt leads me to believe the studio knew they had to get solid leads to work with the complicated sci-fi material so often associated with "Planet of the Apes." You simply cannot go wrong with Ferris Bueller and that lady from "Twister." I can only hope that we see some sparks flying on the big screen with these two!

Twister...Ferris...Chimp...this cannot possibly fail.
With the bad taste of Tim Burton's version of the franchise still lingering, it seems a long shot that the devotees of "Planet of the Apes" will finally be getting a movie worth their dollars. This trailer should go a long way to quell the fear any die hard fans may have. We'll find out in August when the apes rise to the screen!
Posted by MarkusWelby1 at 4:17 PM