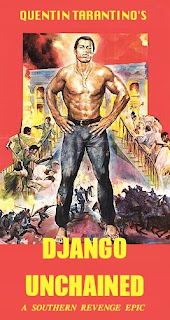 There are two things in my film life that I consider myself to be somewhat knowledgeable of. One is the spaghetti west and the other is Quentin Tarantino's body of work. I'm kind of a biased fanboy when it comes to the former video store geek and while I don't get all the references he has peppered into his flicks, I can usually get some of it. See....you have to be careful when viewing the hyper ones work all right.....he'll try to trick and mislead you all right. Let's take "Inglorious Basterds" for example. That movie wasn't about a group of ragtag soldiers on a suicide mission to kill Hitler. That was merely a clever disguise designed to show you his love of European cinema and present you a foreign film made by an American. Now let's get to the bottom of "Django Unchained" all right.

When most people think about the spaghetti west, the "Dollars Trilogy" usually pops into their heads. There were actually hundreds of others in the genre.... and some arguably better than the Sergio Leone classics. In 1966, another Italian director named Sergio Corbucci took a guy that resembled Eastwood and cooked up a pasta classic known as "Django." I'll spare you the plot details because you should just see it for yourself, but the titular coffin dragging character made Franco Nero a star and made "Django" a legend. 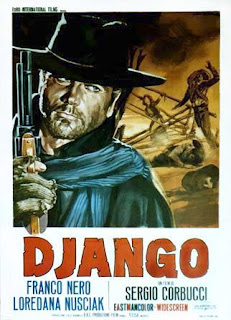 The original....the classic....the best
Django was so popular that no matter what film Nero did next, the foreign markets often just referred to it as another Django movie regardless of whether it was a western or not. 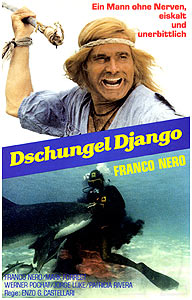 Called "The Shark Hunter" but in Germany it was "Jungle Django"
There was apparently little copyright protection during this period of time because if a studio wanted another western Django film, they would just make one of their own. Sure there would be a character named Django, but it wouldn't star Nero nor likely have anything to do with the original character. It's nigh impossible to name the whole series of knock-offs at this point, but here are a few that stand out. 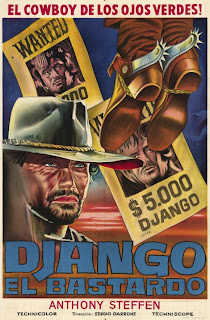 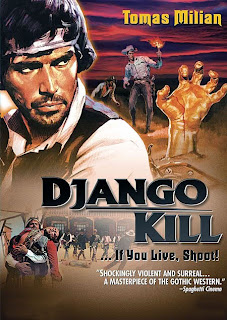 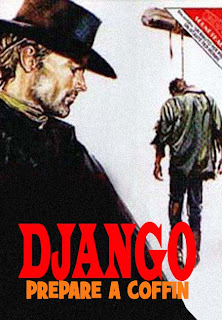 The closest resemblance to the original starring Terence Hill
Franco Nero did return to the role that made him famous in 1987's "Django Strikes Again." I loved seeing Franco back as Django, but this one had very little of the bad-assery that made the original so great and seemed to be trying to cash in on the "Rambo" craze of the 80's. 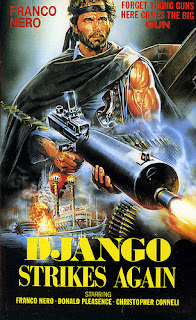 Django or Rambo?
Most of the Django films centered on revenge, and that's most likely what we'll be getting with "Django Unchained." This one could be my most anticipated of all of Tarantino's films simply because I love spaghetti westerns so much. I think I'm on the right track with this one, but I guess we'll find out for sure when Django gets unchained in 2012.
Posted by MarkusWelby1 at 1:20 PM