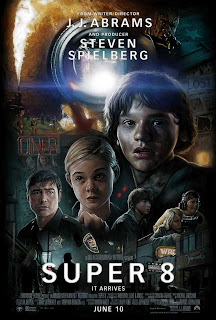 The internet makes it difficult sometimes for me to be a completely pure movie fan. What exactly does that mean? It's getting harder to go into a theater fresh in a day and age where websites and blogs shed light on every little detail about a movie before it's released. I'm trying to turn over a new leaf when it comes to movie spoilage which is why I very much appreciated the way they marketed "Super 8." I knew Abrams and company were going for the retro Spielberg vibe, but was still blissfully ignorant when I bought my ticket. I kind of feel that showing an audience just enough to peak their interest without ruining the plot should be standard trailer 101 strategy, but I'm realistic enough to know that approach won't always work. There have been many times when I've turned to a movie buddy after a trailer and said "well they've shown me the entire plot in two minutes." I think that has happened to all of us at some point, but don't you love it when the powers that be can slip in a surprise every now and then? Here are some of my favorite mystery trailers.


The Matrix (1999)
This is the original thirty second spot that sold me. I think Fishburne's tagline at the end sums it up the best.

Inception (2010)
Film enthusiasts who were on board since Nolan's "Memento" knew they were buying a ticket no matter what for this one. It looked action packed, mysterious, and if you could tell me what it was about after seeing this, I'd say you were way above the intelligence curve.

Sucker Punch (2011)
A tale full of sound and fury signifying nothing. Unfortunately, many people felt the same way after seeing the final product. How do you market a story about a girl who is about to be lobotomized anyways?


Dark City (1998)
My favorite trailer of the bunch, and maybe even all time. Film noir, sci-fi, that guy from "Rocky Horror".......what the hell was going on here?  This predates "The Matrix" in terms of  having a super powered messiah living in an artificial reality. The film commands repeated viewings to this day.

It's nice to have an opportunity to sometimes just let a movie spill its secrets on you while watching it in the theater. What trailers have you seen that could be included on this list?
Posted by MarkusWelby1 at 1:08 PM