Until moments ago, I had no idea this franchise boasted the talents of Burt Reynolds and Gary Busey. Huh...look it up. 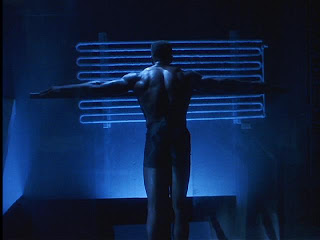 This is the preferred posture for cyborg killers. It enhances spinal structure and keeps the body limber in case any sexual activity is needed.


Anyways, you know a movie doesn't have much of a chance when it starts out with a computer sporting a floating, rotating cube as its main interface. That shit never pans out. Swordfish says HELLLLLOOOO.  In this case, the cube-sporter is S.E.T.H., a computer program that was, apparently, built to be self-aware. It's no wonder, then, that it senses its eminent doom and goes berserk on its human overlords. S.E.T.H. (Michael Jai-White) even says it in plain English during one of his less boring speeches about computer dominance. It's kind of like The Terminator, minus time-travel and a semblance of competence. 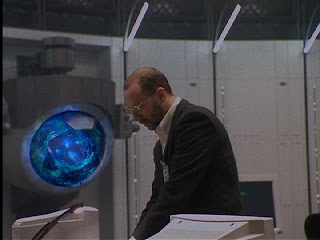 The movie doesn't really have any coherence, so you'll pardon me if I skip all over the place while talking about it. There's a stereotype in '90s movies that I really, really despise. When the plot involves "hacking", "the internet", or some combination of the two, there is invariably some dipshit with no fashion sense or personal hygiene who is employed to run things at some point or another. Of course, the same holds true in this debacle. Meet, um, what's-his-face: 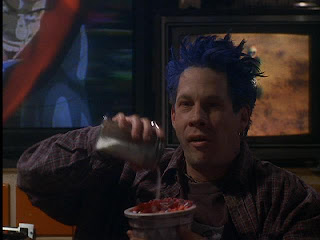 
The problem with that guy is that NO ONE IS FUCKING LIKE THAT. I'm sure if you were to scour the planet, you would find that guy. Probably. But for all intents and purposes, that character is insulting to, oh, every IT guy ever. Hell, I'm no IT guy, and I'm insulted. If I ever looked like that, I would pray that a sentient machine would come to my place of residence to snap my neck and use me to fuel its mechanical processes. The injury to that insult is that I've seen that actor before, and he was in much better circumstances. Oh, well. Some people can't be choosers.

The basic plot goes something like this (keep in mind I've never seen Universal Soldier II or III. I'm so sorry.): Luc Deveraux (Jean-Claude Van Daaaaaaaaaaaaame) is back with the cyborg monstrosity program, aiding in....some capacity. It's unclear what, exactly, he does there. I know that he helps hone their programming by fighting them on a jet ski in the middle of a swamp with a big-chested female agent. That, and he has the code to stop self-termination should S.E.T.H. ever run amok. In any case, S.E.T.H. does, and Deveraux has to kick some ass. The question is begged, then, why there wasn't simply some kind of protocol in place to instantly render S.E.T.H. inert if it were to take charge. Details, bah. Who needs them.

Not this movie. For another example, I enter into evidence the fact that every time S.E.T.H. needs to make a decision, it's compulsed to verbalize every step of its thinking process. The camera cuts to a random computer monitor, where each step is conveniently laid out in supposedly perfect computer logic. I enter this into the court as evidence A-1: 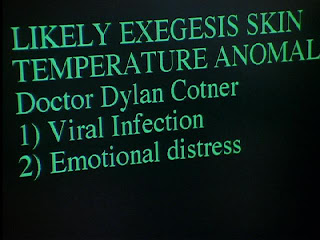 Just in case someone else was wondering.

As I said, the plot is nigh-incomprehensible. S.E.T.H. decides that its life is in danger once the Pentagon de-funds the Universal Soldier project. So, naturally, it miniaturizes and inserts itself into a human body. Once Deveraux learns of this devious ploy, he goes to a strip club. Why? I'll get to that in a moment. But while he's there, he learns what the super-computer-with-ripped-abs is up to next. But...wait a minute. So, OK. The program was initially the entirety of the super soldier program. It sensed it was in danger and inserted itself - in its entirety - into a human host. Alright, I'm with it so far. But when Deveraux decides to figure out its plans, he says he needs to find an internet connection so he can hack into "the system." Umm, maybe I'm being really dense here, but what fucking system? The whole thing is now stored inside a single human brain, so....what exactly is he hacking into? He mentioned some crap about a satellite, but I'm not buying it. I call bullshit, Jean-Claude. Sorry. 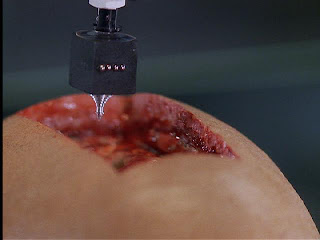 Oh, yea. By the way, inch-and-a-half square chips are just smushed into human brains like spoons to mashed potatoes. How could that ever go wrong?

Ah, yes, back to the whole strip club thing. I started off this review by giving one way you can tell a movie is headed for disaster. Well, another way to tell is by noting how many times the filmmakers try to work in tits for no reason whatsoever. As I'm sure you've guessed by now, this movie uses that tactic to its full potential. Tits McGhee (Van Damme) goes into the strip club in order to hack the system. What he ends up doing is starting an all-out tits-and-redneck bar fight, where even the strippers bash some skulls with liquor bottles. Again, maybe I'm being dense, but I would think it's in in the strippers' best interests to NOT bean the customers over the head with glass objects. If anything, they should just run and hide. Ah, whatever. NAKED TITTIES AND PUNCHES FOR EVERYONE.

How could I possibly sum up this movie? Well, I watched the featurette on Van Damme after it was over. In it, he talks about how he basically grew tired of making movies based on a good script and good money. He wanted to start making movies with a message. In essence, that shows how worthy an artist is. Alrighty, then, Jean-Claude. What was the message of Universal Soldier: The Return? Bill Goldberg's acting blows? Female reporters should be banned as character templates? Butt-rock should never be used during fight scenes? Check, check, and check; your movie had all of those elements in place. Message received. You are a true artiste. If I ever need someone to convey the soul of kicking someone in the crotch, I shall not hesitate to call on you for assistance. Thank you in advance.
Posted by Sir Phobos at 3:41 AM