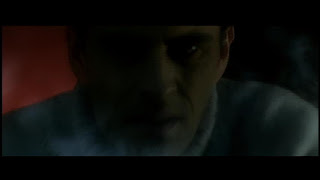 I just finished watching Calvaire, and one thing really struck me: This movie has been made about 80 bajillion times. Guess what, though? It's awesome. The plot takes about 5.5 seconds to explain, but that's alright. A guy's van breaks down in bum-fuck nowhere, France, and he ends up at the mercy of some horrendously flawed individual. Yes, please stop me if you've heard that one before. But I swear this one is different.


First of all, Calvaire is a film by Fabrice Du Welz, who also directed Vinyan. I reviewed that around two years ago, but in hindsight, that review is kind of shitty. For one, I started off by talking about Calvaire, which I hadn't even seen at the time. I don't know what I was on about there, so....sorry about that. Anyways, Vinyan was a pretty damn good movie until the final few minutes. All that work towards making it awesome was dutifully crapped on as the credits rolled. Thankfully, not so with Calvaire. The plot synopsis on the back of the DVD says something about the depths of human depravity, and while that's true, you shouldn't expect to see another Saw or Hostel. There's blood, but nothing even comes remotely close to some of the shit in those other two movies. There are no tendons being severed on-screen, for example. OK, so there might be a crucifixion, but I swear it's watchable. Welz is no Mel Gibson, that's for sure.

The movie starts out with a bizarre, yet tone-setting scene. Marc Stevens is a traveling performer. He sings for retirement home folks, and....um, probably other retirement homes. Only one performance is shown, so I'm guessing here. For some reason, even though he kind of blows, everyone at the retirement home loves him. When I say everyone, I suppose I only mean one old, perverted woman, and another, younger, sexier woman. He totally had the chance to do both of them. I would have passed on the former, but that's me. Especially since she gives the stink eye from second story windows. Creep fest. But neither was to be. Not long after Marc leaves for his next gig, his van breaks down near a small, rural village. A local helps him find his way to the inn mentioned on a road sign, and only flowery, feel-good things happen from then on.


Yes, this is the main character. No, he doesn't do this crap the whole time.

Alright, so why should you see this movie? There's literally no musical score until the last minute of the film; there are no naked co-eds frolicking in their own idiocy; hell, there isn't even a sex scene (well....umm....there is, but I don't think you'll enjoy it. If you do, I have some anthrax I can mail you.). Review over. I hope you like the movie.


This, children, is called fucking a cow. It's generally frowned upon.

Syke. If I had to point to one solid reason why this film should be viewed, it's authenticity. Not so much in the circumstances themselves, but in the way they're presented. Take, for instance, Human Centipede. The dipshit parade's car breaks down, they knock on a random door, and right away they're in a world of pain. The villain, while awesome, is hardly a real person. At least not any that I know. In Calvaire, the antagonist, Bartel, seems like any other backwoods dude. A little weird, but hey, as I said, he lives in bum-fuck nowhere. Being weird is acceptable in that case. Ah, but he's not just a little weird. He doesn't exactly have ulterior motives, but his psyche is quite fragile, to say the least. Having a traveling musical performer visit his home doesn't do anyone any favors.


Neither does having these people as neighbors. Seriously.

Why is that? Well, at some point, Bartel's wife left him. She was a singer of some sort. Maybe she only sang for him, but in his world, that makes her a singer. He longs for her to return to him, and simply having another singer in his midst is enough to send his little, cookoo brain into a shorted-out frenzy. He eventually believes Marc is his wife, and he'll do anything to make good on this second chance. I say eventually, because nothing outright bad happens until half-way through the film. It's not terribly exciting until then, but I enjoyed the characters and build-up. The lack of music lent a kind of tangible feel to every action and sound. Every shuffle of the feet, every creak of the floorboards could be heard in an intimate way.

I won't describe the rest, save for the fact that I got a tad bit of Straw Dogs from some stuff towards the end. Only a tad bit. Perhaps rednecks and guns unfairly fit the bill every time, who knows. Also, the last scene is fucked up beyond belief, yet oddly satisfying. I hope the intrigue is killing you right now. Go check out Calvaire. 4 out of 5 bestiality professionals recommend it.