The assault occurred while the thespian was getting his daily dose of java at a local Starbucks. As Butler left the coffee shop preoccupied with his cell phone, the Spartans seized the moment to surprise him, drag him into the back alley, and make an example of him. "I couldn't believe this was happening to me," said an extremely dismayed Butler. "I kept telling them THIS IS BLASPHEMY....THIS IS MADNESS, but the leader simply held out a DVD of The Bounty Hunter and yelled 'THIS IS SHITTY ACTING'!"

as a distracted Butler exited Starbucks.... 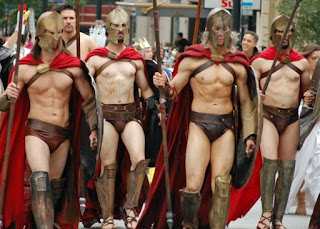 Butler was able to call 9-1-1 for help immediately afterwards, and he was rushed to a local hospital where the tar and feathers were painfully removed from his body. "I have fewer pubes now than I did in 300," said Butler. "But rest assured.....lesson learned....I'll be firing my agent after I leave the hospital, and my next film should be a testosterone filled, testicle exploding freak-fest with nary a shitty accent to be heard!" SPARTANS.......PREPARE FOR GLORY!