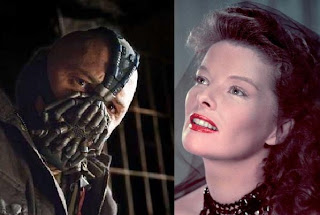 Tom Hardy has been carving out a nice little niche as a tough guy in films like Warrior and Bronson, but the actor was at first hesitant to reveal to his fans where Bane's voice is channeled from. "I didn't want my admirers to feel I was a girly-man, but the truth is I'm just doing an impersonation of Katharine Hepburn," the actor confesses. "I'd sit in my trailer between takes and just continually watch her films over and over to get it right. Christopher and I felt that Bane's voice needed to be tough, annoying, and always sound like he's about to choke on phlegm. But there had to be a touch of class mixed in with all those elements as well, and we felt impersonating Hepburn would bring all those things together wonderfully. Also,  Bales Bat-voice always sounds like a guy who is speaking while continually having his ass wiped with sandpaper. We felt we needed to have Bane's vocalization be the ying to Batman's raspy yang." 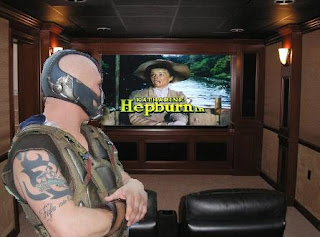 Perhaps now movie geeks will better appreciate what Hardy has created in Bane now that they know the actor's motivations. So when you get your copy of The Dark Knight Rises home, make sure when Bane speaks, you turn your speakers up to eleven!