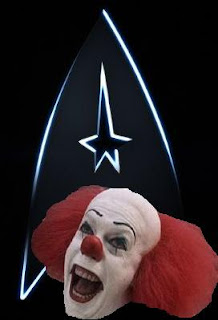 This is a strange one, folks, but it seems to be legit. Our best-paid intern has uncovered evidence that despite rumors to the contrary, Tim Curry will once again be donning his pants-shitting monster clown outfit, only this time for J.J. Abram's second Star Trek film. Combining Stephen King's It with Star Trek might seem like a bizarre combination, but the proof is in the pudding. Continue reading to find out what the cross-over will mean for both audiences and filmmakers alike.


I have to admit, this caught me off-guard. When the news hit my desk, I immediately got J.J. Abrams on the phone to confirm this insanity. Sure enough, after exchanging a few pleasantries, Abrams did, in fact, confirm the presence of Pennywise the Clown in his next feature.

"I can't believe you guys found that," Abrams remarked, flabbergasted. "I thought our Klingon ruse was sufficient. I'll have to try harder next time. But...yes, you're correct. I might as well spill the beans, since you're going to find out anyways." 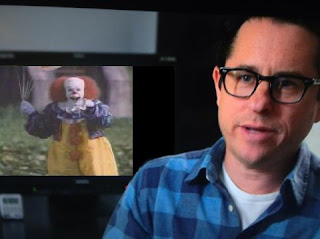 In the undoctored photo above, the dead lights of Pennywise can be seen on the monitor behind Abrams.

My second order of business was to contact Tim Curry. He was understandably busy, but the actor was kind enough to talk with me about his newest role. 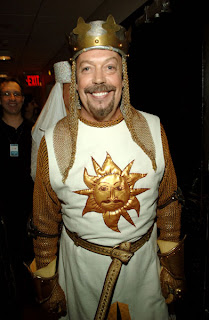 Curry took time out of his busy schedule doing...whatever he's doing to set the record straight.

When asked how this collaboration came about, Curry spoke candidly. "Well, Curry said. "Abrams approached me a few months ago, and he said he had this great idea in mind for Star Trek. He told me he thought Kirk was always this cocky asshole, and his ego needed to be cut down a little bit. What better way to do that than to have a clown with razor-sharp teeth come at him out of the drain while he's taking a shower?" 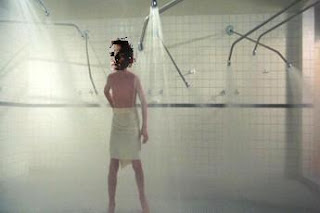 Curry elaborated further, describing how Pennywise will unleash his unique brand of psychological terror upon the Enterprise captain by "...never giving him a moment's peace. Everywhere Kirk looks, Pennywise will be there, beckoning him."

Away missions will not give Kirk the respite he's desperately searching for.

In the one bit of script news I was able to pry from Abram's hands, Kirk and Pennywise have a short exchange that doesn't quite end on a pleasant note. To set the stage, the crew of the Enterprise get a strange transmission from an unknown source, and, naturally, they pipe it in through the viewscreen.

Kirk: Who are you?


K: Play? Play where? We're out in the middle of space.


P: Oh, they all float out here. They allllllll float. THEY ALL FLOAT!

Even Spock was alarmed at the disturbing imagery displayed on-screen.

I don't know about you, but I'm camping out in line for this one. Would you put down your hard-earned cash to see Pennywise stalk the fearless captain, or has Abrams and company finally jumped the shark?