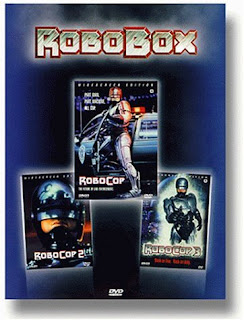 Well, there you have it, folks: The RoboBox. Whatever version of Robocop you own, it's not as good as that one. I mean, just look at it. It has 3 Robocop movies, and they're in a Box. The person who came up with that idea should get some kind of a medal. Maybe even a nobel prize. The funny thing about it, though, is that it's not the worst box art for Robocop. It shows mini versions of 2 of them, but to see them in their full glory, you'll have to keep reading. You have 20 seconds to comply.


First up is Robocop 2 and 3. Each cover has its own unique style, so it's difficult for me to decide which one is shittier. 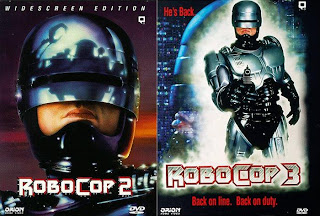 Which pig has whose lipstick?

So, with Robocop 2, you have what seems to be a standard shot of his head, but a couple of things are amiss. The first thing is his skin, which is either totally hand-drawn, or it's just a shitty-looking Photoshop job. It's probably the latter. The second thing, though, is even better. I don't really remember the movie very well at this point, but the reflection on his helmet looks to be that of Tik-Tok of Oz holding a pooper scooper. I'm pretty sure he wasn't in Robocop 2, but if he was, Murphy would probably make him scoop up that poop.

The Robocop 3 cover, on the other hand, is less vague. I can tell exactly what's happening. Robocop is time-warping in a cloud of smoke out from the side of his own head to arrest you. That's pretty much the only thing that could possibly be taken away from the awesome narrative that is that cover. It's obviously shitty, but at the same time, I can't put my finger on whether or not Robocop exploding out of his own head makes it better or worse than the other one. Oh, well. Some things are meant to stay a mystery.

As if one Robocop 3 DVD cover wasn't enough, check out this French version. It looks like he's enforcing the law on Jupiter while molten lava floats freely in the vacuum of space. 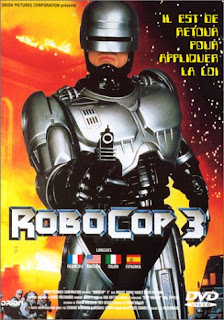 According to Google Translate, this thing says "He is back to enforcing the law."

Now, I don't know about you, but I have no idea what the hell Robocop Prime Directives is about. It looks like a collection of DTV crap, so that's probably what it is. In any case, there's a boxed set that contains 4 (!) DVDs of presumably stellar quality. I'm sure no expense was spared in the making of each disc, as you're about to see. 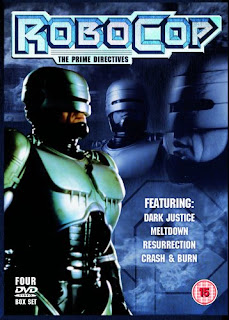 Featuring: Robocop staring at Robocop. The Robocop in the back is spacing out, not thinking about much of anything. Maybe he's dreaming of eating some protein paste.

It's been great looking at all these shitty DVD covers, but the real reason I brought you all here is to gawk at one in particular. The original Robocop is a bad ass imagining of what happens when greed and politics go unchecked. A private security firm gets their hands on the public police force, and, well, bad shit happens because of it. But all that is irrelevant here. The only thing that matters is the reason why this particular DVD cover looks like the mother lode of ass. I'll save my specific commentary for after you're able to witness this monstrosity. 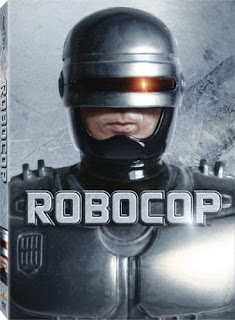 Behold the masterpiece of shitty DVD covers, Robocop or otherwise.

Okay, look. This one is bad. Bad, as in, Jesus Christ, what the hell happened bad. Robocop is either stifling a smile, or he's trying not to vomit all over your new jacket. He sort of looks like Daniel Craig eating a lemon. In fact, I almost wish I had a poster of this one. I'd hang it on the ceiling above my bed just so I could wake up every morning and have a good, hearty laugh. It's a given that Robocop doesn't deserve this treatment, but since the damage is already done, we can all just stare at, and loudly judge, the fruits of some asshat's labor. I hope this was as cathartic for you as it was for me.