In a day and age where it's almost impossible to keep details about a movie production from leaking out, GPS was surprised to hear the news that Fox Searchlight Pictures have secretly been working on a sequel to the smash hit "Black Swan." Made for a paltry thirteen million dollars and grossing much much more, the studio heads are eager to make sure their dancing swan keeps laying golden eggs for their bank accounts. Natalie Portman has agreed to reprise her Oscar winning role as the troubled ballet dancer Nina, and a back in shape John Travolta will co-star. Since Darren Aronofsky turned down the chance to helm the next chapter, the powers that be have hired Sylvester Stallone for the job. Sly is no stranger to sequels about dancers, and promises that the saga of the bad girl ballet will positively knock out any doubters. Once again, GPS was given unprecedented access to all the yummy details about the Italian Stallion's production. 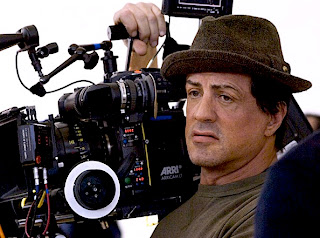 Sly ready to go the distance directing the ballet
We asked Sly why he made such an unusual project choice after a string of successful action pictures. "Basically there are two things that are a blight on my resume........Rocky V.....and Staying Alive......hey....yo....that rhymes," the director laughed. "Rocky Balboa made up for the dung heap of part five........and now I gotta scrape the terrible taste of Staying Alive off my tongue.......that's why Travolta is back with me again as Tony Manero so we can make it right this time........I'm gonna make the most amazing ballet sequel ever, and it will kind of work as a trilogy for the character John made famous in Saturday Night Fever!"
The plot will have Nina's soul somewhere between heaven and hell struggling to become the white swan again. "It's pretty deep stuff if you think about it," Stallone told us. "See......she's initially black and evil......and by the end......she'll be pure and white again....it's like the first one only in reverse." Travolta will be strutting his dance moves once again as Tony Manero, but this time he's an evil force trying to make Nina remain the black swan for all eternity. Tony committed suicide after his Broadway show career flopped, and he's been trapped in limbo dealing with Catholic guilt.  Sly had only good things to say about being reunited with Travolta. "He's just had an unbelievable career.......Welcome Back Kotter.....Wild Hogs........Battlefield Earth.....Look Who's Talking.......the list goes on and on and I'm so happy we're back staying alive together again.....ha ha....!" 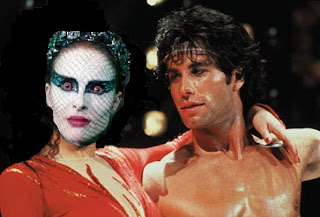 Nina's soul is tempted by Tony's sweaty evilness
Stallone promises to showcase the most lavish and meticulously choreographed ballet dancing ever put on film. "This movie is gonna hit people like a freight train, and it's coming at em in 3-B and filmed in 3-D," the Stallion proclaimed. We knew about 3-D, but had to ask what exactly was 3-B? "Ballet....... with balls.......and Bee-Gees," he replied. It's true. The legendary Bee-Gees will be on soundtrack duty for "Black Swan 2" providing an eclectic mix of new music as well as old favorites from the vault. 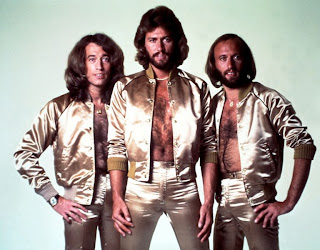 And Bee-Gees! It's 3-B in 3-D!
This certainly sounds like one of the most ambitious if not preposterous Hollywood productions ever attempted, but we'll hold back our skepticism till we see the final product. We look forward to seeing Nina transform back into the white swan, and are chomping at the bit to see Travolta return to full dance mode! "Black Swan 2" could be one heck of a show, but it will be difficult to predict if it can "Stay Alive" at the box office when it's finally unleashed onto the viewing public. Good luck Sly! 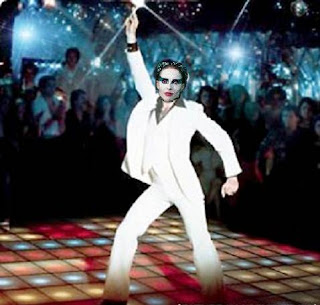 SPOILER! The White Swan emerges victorious!
Tweet
Posted by MarkusWelby1 at 10:12 AM