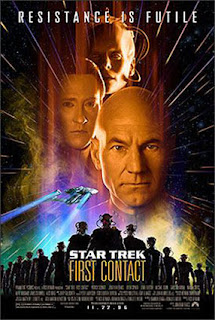 I had so much fun with visiting the "Dirty Harry" film locations in San Francisco that I couldn't resist posting about other places I've been known for famous movie shoots. A couple of years ago, my employers sent me to Tucson Arizona where I got to visit the Titan II missile silo. The decommissioned military installation was used to convert an old Titan II 9 megaton missile replica into the spaceship Zefram Cochrane used for his first warp drive test in "Star Trek: First Contact." When I initially planned my visit to the museum I had no idea, but was giddy as a schoolgirl when I learned about the Star Trek connection. I'm not really a Trekkie......but I am a total movie dork. Enjoy.

The missile tricked out for Trek My shot of the missile as it is now
You can see my "Dirty Harry" location visits right here http://bit.ly/nf1Xjq
Posted by MarkusWelby1 at 10:09 AM