One of the first clear indicators of trouble was the film version of 80's TV favorite Miami Vice. Apparently his cabinet thought it would be a good idea to make a contemporary version of the cop drama minus the pastels and fun. Said one exit poll interviewee after the film, "Was it just me or did President Foxx not seem to give a shit?.....and what was up with Colin Farrell?.....For someone playing a vice cop, he looked totally stoned the whole time." 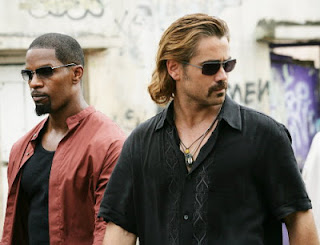 Another unpopular move for the Foxx administration was his policy on Iraq. Without any regards towards human life, President Foxx and that chick from Alias blew up half of Baghdad just to save the dude from Arrested Development. When asked why he would sacrifice so many lives to save one, the President didn't hesitate to respond. "America desperately needs season 4 of Arrested Development. It represents the very core of what it means to be the richest 1%." 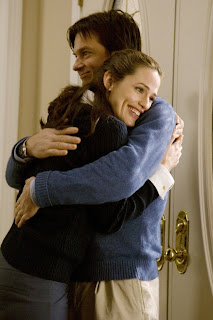 ...so Jason Bateman could portray Michael Bluth one more time

Foxx's ratings took an even bigger hit after being cast as a slave in the antebellum south for 2012's Django Unchained. According to someone who had too much time on their hands, the Quentin Tarantino directed film had the N-word spoken over 100 times. White devil conspiracy theorist Spike Lee was extremely unhappy with President Foxx over Django, and he confronted him about it at a recent town hall meeting. The two briefly exchanged verbal jabs before Lee was escorted out by the secret service. "President Foxx is just the white man's puppet, and the Kincks will never win a championship as long as he is in office," said an angry Lee as he was kicked out of the building. 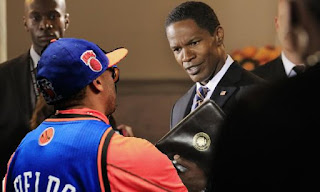 But the worst may be yet to come for the Foxx administration. Though White House Down could still prove to be a major boon for the movie economy, movie geeks across the country are already deeming it a massive failure. Foxx has chosen a director in Roland Emmerich who hasn't been relevant since the 90's, and President Two-Face already saved the White House a few months ago with help from Gerard Butler. Will the registered movie going voters be able to accept two regurgitated Die-Hard amendments to the celluloid constitution? We'll find out this summer.