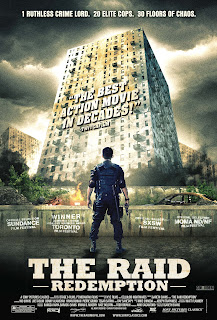 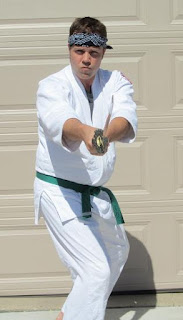 jaded action vet extraordinaire
ACTION FILM WATCHING STYLE: You could call it the art of watching without watching. When a bad guy gives a five minute long speech instead of blowing the hero's brains all over the floor, I don't even need to have my eyes open to know the villain's ego will allow the tables to be turned on his narcissistic ass at some point. I have spent many years seeing Seagal survive with nary a scratch to show for it, and was in the theater way back in the day when Daniel-San defeated the Cobra-Kai with his thunderous crane kick.  I've seen "First Blood" almost a hundred times so if "The Raid: Redemption" wants a war......I'll give them a war they won't believe!
EXPECTATIONS: These Indonesian guys are typically pretty small so my 6-2 200lb plus frame should be able go the distance. I don't play fair, and I will sweep that wounded leg. Get em a body bag YEAH!
Phobo-S.W.A.T. 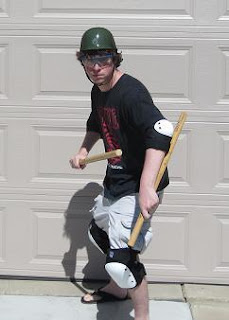 combatant of the cliche
ACTION FILM WATCHING STYLE: Do these guys even know who Chuck Norris is over in Indonesia? Chuck + Jackie Chan + Tony Jaa + Chow-Yun-Fat = "The Raid: Redemption" knocked on its ass! I am the drunken movie master with several thousand inebriated hours notched on my beer belt. There are action films in my collection that span the globe and only play on region free DVD players. My watching experience has taken me to Thailand, Japan, Korea and more. Indonesia should be just another blip on the map that will have my boot print all over it when the movie is finished!

EXPECTATIONS: My smaller size should allow me to equal the speed of the Indonesians. I'm taking "Oldboy's" hammer with me and I intend to whack "The Raid: Redemption" right into the hallway of Hell! 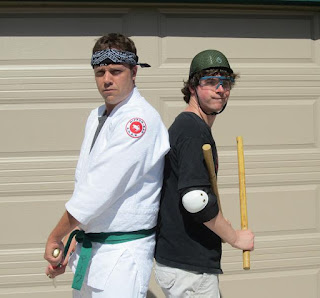 
Needless to say, we both felt extremely confident going in. We had our cocksure attitudes firing on all cylinders along with a plate of those disgusting theater nachos to sustain us just in case "The Raid" got in a lucky shot or two. But when the lights went out and "The Raid: Redemption" began, we quickly realized we were over matched, out gunned, and unprepared for the Indonesian onslaught that was occurring on screen. 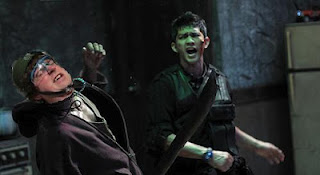 Phobos' much touted speed proved to be useless 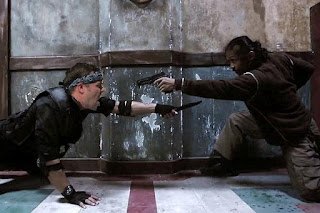 Welby attempted to bring a knife to a gun fight 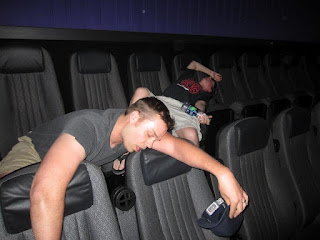 GPS Knocked the F#@K out by "The Raid: Redemption"
The Aftermath


We stumbled out of the theater humiliated, bloodied, and bruised. Somehow we were able to make it home, assess the damage, and ask ourselves....."what the Hell just happened to us?" 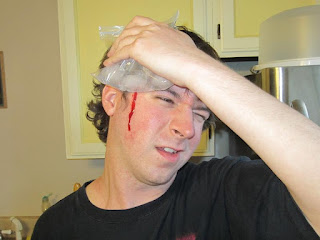 Phobos with the punch
PUNCH: I think the machete melee squad mayhem was just too much for me to handle and those Indonesians are so quick there were times I didn't even see them on the screen.........fuck. 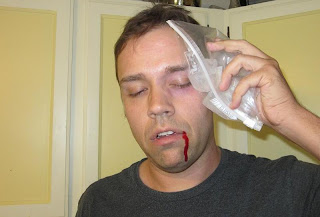 Welby with the counter-punch
COUNTER-PUNCH: Death by incandescent light has to be a movie first for me and I think I was rendered unconscious shortly after that.
Final Thoughts


All kidding aside, "The Raid: Redemption" is one of the greatest action spectacles to ever be committed to film we shit you not. We at GPS eagerly await a sequel, but will take the time until then to get some much needed blood transfusions and physical therapy for our aching bodies. 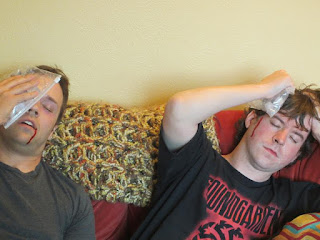 Phobos & Welby will be considering chick flicks from now on